All in the Game: 177 for Ramos as he breaks Buffon’s record

Kilman doesn’t get juices flowing in Russia, John Carver tears his calf for the Scots 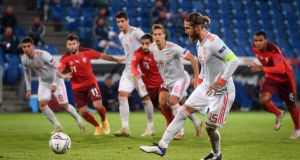 Max Kilmaan gets shot down

It’s been a productive 18 months for Max Kilman, the Wolves defender who made his debut for the club the May before last, becoming the first man since Chris Smalling in 2008 to play in the Premier League having been signed from a non-league club.

The 23-year-old is beginning to establish himself in the starting XI this season, his form earning him a contract extension that will keep him at Wolves until the summer of 2025.

He’s in high spirits, then, so when he spoke to the BBC recently he admitted his thoughts are now turning to international football. While he represented England in Futsal 25 times, he reckons his more realistic international route is with Russia or Ukraine, his mother from Kiev and his father a Moscow native.

“When I was little, we sometimes went to Moscow. I also spent a lot of time in Kiev, where many of my mother’s relatives still live. My Russian is not as good as it should be, but I can express myself,” he said, adding that “the doors are still open” to both countries.

How excited was Russian Federation boss Igor Lebedev when he heard this news? Eh......

“If Messi announced tomorrow that he is ready to play for the Russian national team, that’s another matter. This would, of course, be amazing news and one could say that Russia is already in the final of the next European Championship. But this player is from a team that few people even in Russia know. Therefore, I do not see anything super interesting in this.”

“Patience?! Would you like it if you were stuck on the bench?! The players in front of him can’t even kick a marble!” - Former Dutch international Rafael van der Vaart somewhat at a loss to understand why Donny van de Beek isn’t getting picked by Ole Gunnar Solskjaer, while being quite rude about his team-mates.

177 - That’s how many caps Sergio Ramos now has after passing Gianluigi Buffon’s record for a European player in Saturday’s game against Switzerland, the Real Madrid marking the occasion by, eh, missing two penalties.

“I can pick up the phone and speak to all of my previous Liverpool managers. Except for Rafa. I don’t think he liked me as a person, I’m not sure why. It probably started even before he spoke to me, when he met my mum.” Steven Gerrard blaming his Ma for his dodgy relationship with Rafa Benitez.

“I have the desire to return to Brazil, but when it will happen, only God knows. I know that God has something for me, I want to follow God’s plans for my life, but my heart’s desire is to return to Brazil, if God answers it.” Liverpool goalkeeper Alisson on his wish to finish his career back in Brazil, God willing.

“In the United States we think Manchester City is a really big club. But here in Manchester, it’s not a big club.” Even before she scored against City in Saturday’s derby, Tobin Heath had proved her Red credentials.

We’ll go with the chat Eric Olhats had with France Football about Antoine Griezmann, the player he discovered for Real Sociedad back in his scouting days before working as his agent until 2016.

Since joining Barcelona the summer before last, Griezmann has had to deny having a poor relationship with Lionel Messi as often as he’s had hot dinners. Did Olhats put the theory to bed?

“He arrived at a club with major problems where Messi controls everything. Messi is both an emperor and a monarch and didn’t view [Griezmann’s arrival] well. Messi didn’t speak to him and didn’t pass him the ball. It created a real trauma and a negative adaptation and something like that must have left a mark. This was all evident and visible. Messi’s attitude has been deplorable. It’s a regime of terror. You’re either with him or against him!”

“Until a year ago I didn’t even know what GOAT meant, I was like: ‘It’s not really nice for people to call me a goat. It’s not the best animal to be.’” The Netherlands and Arsenal’s Vivianne Miedema, quite possibly the Greatest Of All Time.

“Yes I am English, but I am a professional and I have given everything for Scotland - including a torn calf. It was pretty embarrassing.” Scotland’s assistant coach John Carver on the injury he picked up while running towards goalkeeper David Marshall after his penalty save earned a spot in Euro 2022. Morto.

“Matip is a decent player but he’s like a willow tree - he occasionally gets blown over and he’s not fit for two or three weeks.” Mark Lawrenson reckoning Joel Matip is a bit too fragile to be the solution to Liverpool’s injury crisis.