All in the Game: Osama Bin Laden found at Elland Road 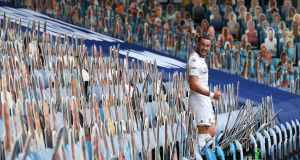 We’re guessing you might have heard about Leeds United’s mishap with their ‘crowdie’ innovation, where fans pay £25 to have their face put on cardboard cut-outs placed in the Elland Road stands to make up for them being locked out of the stadium. It was a supporter with the Twitter name of @AllLoveLeeds who spotted the problem, the fella surveying a photo of the cut-outs in the hope of seeing himself. It was then that he tweeted the club. “Thanks @LUFC, I’m next to Bin bloody Laden!!!”

He was too, someone actually having paid £25 to have Osama’s face put on one of the cut-outs, the person charged with printing it seemingly not noticing who it belonged to. Besides, as the world and their mothers pointed out, Bin Laden was an Arsenal fan, so he was a fish out of water at Elland Road.

Leeds apologised profusely, but they’re far from the only sporting club to have had issues with their crowdies. Whose face appeared on a cut-out at the Australian rugby league game between Penrith Panthers and Newcastle Knights? Only Harold Shipman, the serial killer. And Dominic Cummings was seen at the clash of Sydney Roosters and South Sydney Rabbitohs, although in light of his eyesight problems it’s unlikely that Boris Johnson’s advisor was actually able to see the game.

Best of all, perhaps, were the selection of faces that appeared in the stands at Cheltenham Town’s League Two play-off semi-final against Northampton, among them Donald Trump, Piers Morgan, a topless Gary Lineker, Cilla Black, Spider-Man, Eastenders’ Phil Mitchell, and Only Fools and Horses’ Del Boy, Rodney, Grandad and Boycie. No sign of Trigger, though, although knowing his luck, his face was probably put on back to front.

“He gets the people. He gets the fans. He is Shankly reincarnated in a German body.” Bruce Grobbelaar doffing his cap to the Klopp man.

43: That’s how many major trophies Liverpool have now won, putting them one ahead of Manchester United. Not that they’ll remind them about it.

“I called my family ten seconds before the final whistle. We had a Facetime call. I told them I loved them, they told me they loved me. Then I put the phone on the table and said, ‘Leave it on, because in four or five seconds something special will happen’.” Jurgen Klopp on the ending of 30 years of hurt.

“He’s gone underground again, G Nev. He said Man United were going to win the league before Liverpool at the start of the season - top pundit!” Jamie Carragher on Gary Neville who, for some reason, has been missing since last Thursday night.

“Congratulations Liverpool! 30 years and £1.47 billon spent, and you’ve finally managed to achieve the same as Leicester City and Blackburn Rovers! Well done!” Always the bitter word, on this occasion from a West Ham devotee by the name of Nick (@MarkNoBall).

A tale of two Micheal Martins

“I might be a Man U fan, but it’s very hard not to enjoy the Liverpool success tonight,” tweeted Micheal Snr. “Congratulations to all my colleagues and friends who are celebrating.”

Some time later. “I don’t endorse this one bit,” Micheal Jnr replied. “I hope it’s their last for 50 years.”

A right Red Devil, that lad.

Boateng right on the money

Best response of the week to the ‘All Lives Matter’ crew: That would be the one supplied by Kevin-Prince Boateng, the former Ghanian international who is currently on loan at Besiktas from Fiorentina.

“Some people are like, ‘Yeah, but all lives matter.’ Of course all lives matter. But the black community is burning. So if my house is burning and your house is not burning, which house is the most important right now? Right. So help me put out the fire. And then we can both live in nice houses.”

1 Alain Rolland to step down from World Rugby position
2 Chelsea talk the talk but still struggling to walk the walk
3 Georgia and Fiji in line to join Six Nations sides in eight-team tournament
4 Roger Wilson tackling the problem of bad technique in Texas high school football
5 Game Changers: Gary O’Toole took a stand when others turned their heads
Real news has value SUBSCRIBE
Crossword Get access to over 6,000 interactive crosswords