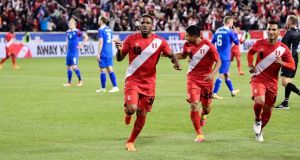 Jefferson Farfan will carry the hopes of Peru along with captain Paulo Guerrero. Photograph: Steven Ryan/Getty

After 36 years, Peru have made it back to the World Cup – the longest absence of any nation present at this summer’s tournament. And Los Incas will be able to call on their captain and star player Paulo Guerrero, who had seemed destined to miss out due to a doping suspension. The 34-year-old was banned for a year after testing positive for cocaine last October – but this was subsequently halved by Fifa’s appeals committee, freeing him to lead his side. The World Anti-Doping Agency then appealed to CAS, who handed the former Bayern Munich striker a 14-month suspension. This is despite CAS acknowledging Guerrero hadn’t deliberately tried to enhance his performance – instead failing a drugs test after drinking a cup of tea made from coca leaves.

However, with his World Cup dream in tatters, Guerrero was reprieved at the last as a Swiss court agreed to temporarily lift his doping suspension while it considered his appeal against the 14-month ban. Guerrero will lead the Peruvian line supported by Lokomotiv Moscow’s Jefferson Farfán, who has 25 goals from 82 international caps - including one in a 2-0 warm-up win over Scotland. Ricardo Gareca’s have a good age profile, with a number of grizzled veterans complemented by a core of players in their early and mid-20s. Gareca will employ a direct style built on a solid defence, and they will fancy their chances of qualifying for the knockouts on the back of results against Australia and Denmark.

In 1970 Peru made it to the quarter-finals, after beating Bulgaria and Morocco in the group stages and qualifying second behind West Germany. However, they bumped into Brazil – who were a fairly handy outfit – in the last-eight, and lost 4-2.

Peru’s qualification campaign started slowly – they picked up just four points from their opening seven games – but a defeat in La Paz was later overturned after Bolivia were penalised for fielding an ineligible player. Peru finished strongly with important wins in Paraguay and Ecuador before a draw with Colombia saw them finish fifth and earn a place in the playoffs. A 2-0 win over New Zealand in Lima booked their place in Russia.

Ricardo Gareca took over in February 2015 before steering Peru to the semi-finals of the Copa America later that year. The Argentinean then masterminded a first World Cup appearance for 36 years.

Captaining Peru at their first World Cup since 1982 should be the crowning glory for all-time record scorer Paulo Guerrero. Taking his place in Russia has been far from straightforward for the 34-year-old. However the Flemengo striker – who spent the first 10 years of his senior career in Germany with Bayern Munich and Hamburger SV – is finally free to lead the line for Los Incas in Russia and look to add to his 32 international goals.

Sau Paulo’s diminutive attacking midfielder Christian Cueva can provide the guile to open up opposition defences. Scored from the penalty spot in a 2-0 friendly warm-up win over Scotland in May.

The game against Denmark is likely to decide who escapes from Group C with France – the Danes seem to have the upper hand on paper.