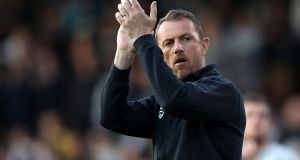 Stoke have appointed Gary Rowett as their new manager on a three-year deal, the club have announced.

Rowett leaves beaten play-off semi-finalists Derby, where he had signed a new long-term contract in January of this year.

The 44-year-old will be charged with getting Stoke back into the Premier League at the first attempt following their relegation after a decade-long stay.

Stoke’s owners Peter and John Coates said in a statement announcing Rowett’s arrival: “We are delighted to be able to move so quickly to secure Gary’s services and we are now looking forward to working with him towards our objective of returning to the Premier League as soon as possible.”

The Potters agreed a compensation package with their Championship rivals to secure Rowett’s release.

Rowett started his managerial career at Burton before moving on to Birmingham in October 2014.

He left Blues following a change of ownership in December 2016 and took over at Pride Park in March of last year.

A Derby statement read: “We wish to place on record our thanks to Gary for his contribution during his time as manager.

The process for recruiting a new manager is under way and the club will make further comment as and when it is appropriate to do so.“