Benitez: ‘Liverpool can do it. They have the quality’ 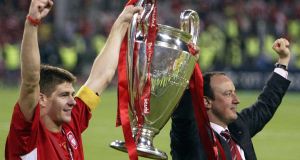 Rafael Benítez has already selected the shirt he intends wearing on Saturday evening.

Considering that some of the best years of Benítez’s life have been spent representing Liverpool and Real Madrid, publicly choosing red over white, or vice versa, would represent a diplomatic gaffe to make even Boris Johnson blush.

A Champions League final between the Merseyside club he so dramatically led to the trophy in 2005 and the side he grew up supporting before eventually coaching and managing, will inevitably prove highly evocative for the 58-year-old Spaniard.

Benítez plans to watch events in Kiev on television at his long-established base on the Wirral. As the teams emerge, he may well reflect on the acute political tensions with, among others, Cristiano Ronaldo which prefaced his sacking at the Bernabéu early in 2016. But he will surely also relive that glorious night in Turkey 13 years ago, when he choreographed the “Miracle of Istanbul”.

“I always say Istanbul will be the most emotional Champions League final ever because of the way we came back,” Benítez says, recalling that crazy evening when, at half-time, his side were 3-0 down to Milan, only to haul themselves level before winning on penalties.

“Milan had [Andrea] Pirlo, they had Kaká, they were the best team in Europe but my players had great belief,” says Benítez. “We did well but Jürgen Klopp’s Liverpool has more quality and value. My budget was £20m.”

Yet, if the Merseysiders are hardly underdogs, neither are they clear favourites against Zinedine Zidane’s side.

“Liverpool’s intensity can hurt you but Real Madrid have the experience and quality to match them,” says Benítez, who grew up in the Spanish capital.

“It’ll be interesting. You’ll see a team with lots of passion and intensity and a lot of pressing and crossing and fast counter-attacking against opponents who can manage this kind of situation.

“Jürgen Klopp has three players up front who can all score goals. Mo Salah has done really well but Sadio Mané and Roberto Firmino can also score against any team. We had a good balance and we also had Stevie Gerrard who could make a difference on his own. But this current Liverpool team has three players who can do that. We had one.

“Liverpool can do it. They have the quality. But sometimes in these kinds of games you pay for one mistake. It’s how you manage the pressure. Real Madrid have been managing this kind of pressure for a while and Liverpool are in a new situation, so it’s a fine balance.”

Win and Klopp’s place in Anfield’s history will be assured. Confirmation that Benítez’s legacy had been cemented came during the post-match party by the Bosphorus when he rescued some invited guests struggling to bypass hotel lobby security.

“A friend pointed to me and asked the security guard, ‘Do you know who he is?’”, recalls Newcastle United’s manager, laughing. When the guard shrugged indifferently, the friend declared: “This man is God.”

Sheer adrenaline ensured that Benítez, virtually a teetotaller, felt no need of even a single glass of champagne that night. Surrounded by a roomful of people convinced he could walk on the Mersey, the former Real Madrid third-team midfielder partied until 6am – but two years later he saw in another, more sobering, dawn.

“Afterwards I walked around the hotel corridors until 7am,” remembers Benítez. “They didn’t have enough rooms and my wife was sharing my room with the chief scout’s wife.

“Half-time was a disaster because it was so hot. We used ice packets to reduce the players’ temperatures and there was too much sports science. I said, ‘Concentrate! We have to talk about tactics and positions.’”

The Ataturk had been much milder but that 3-0 half-time deficit represented an emotional boiling point.

“Everything was going wrong, massively wrong, and I had to give a motivating speech in English,” says Benítez. “My English wasn’t so good then and it wasn’t easy. My main message was that [substitute] Didi Hamann would control the middle and give freedom to Gerrard because Kaká was playing between the lines and we needed to manage the space better.

“We switched to three at the back and that changed everything. We scored three goals, we matched them, we had control in extra time and we’d done a lot of work on penalties.”

If Jerzy Dudek’s decisive penalty save from Andriy Shevchenko was no fluke, Benítez briefly lost control during the victory parade through Merseyside.

“We were on an open- top bus, the music was very loud and it was going really fast under trees with low branches,” he recalls. “We were ducking. I had to tell the driver to slow down.

“Istanbul changed my life in England but at first I didn’t realise what it meant. That happened two or three days later. I went to collect my daughters from school and the other kids started singing to me. Istanbul changed everything.”