Shamrock Rovers prove too strong for St Pat’s in derby 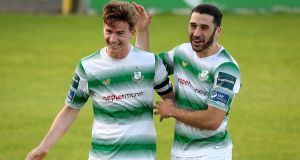 First goals for the club from Lee Grace and Sam Bone, either side of the strike of the game from captain Ronan Finn, brought an emphatic Dublin derby win for Shamrock Rovers at Tallaght Stadium.

The victory, only their second in 10 league matches, moves Rovers to within four points of St Patrick’s, the end to whose four-match unbeaten run sees them slip back to fifth place in the table.

Enjoying good possession from the start, Rovers struggled initially to get their passing going, a 12th minute shot from distance by Graham Burke scarcely troubling Tyson Farago, a replacement in goal for the unavailable Barry Murphy.

Stephen Bradley’s side, though, soon punished indecision from the St Patrick’s goalkeeper, who failed to prevent a corner after good harrying by Dan Carr, to bring the game to life with a 17th minute goal.

Burke floated the ball into the area where central defender Grace met it to find the net with a glancing header.

When they had the ball, St Patrick’s did get forward a little more incisively and might have been level 10 minutes later.

Thomas Byrne laid a pass into the path of left-back Ian Bermingham on the overlap. Though having plenty of time, the visitors’ captain sliced his shot feebly wide.

Despite losing Brandon Miele to injury, Rovers continued to dominate the ball, having appeals for a penalty for an apparent handball by Kevin Toner not entertained by referee Rob Rogers on the half hour.

But a superb second goal, when it arrived in first half stoppage time, was no more than Rovers merited.

Sean Kavanagh and substitute Joel Coustrain worked the ball down the left to the impressive Carr. The Londoner’s weighted pass through for Finn was perfect as the skipper arrived to toe his shot over Farago.

Toner failed to connect at the back post from a Conan Byrne free-kick a minute into the second half to waste a chance to get St Patrick’s back into the game.

Negligent defending by Liam Buckley’s side then all but ended the game as a contest five minutes later as Rovers extended their lead.

Burke’s free kick from the right wasn’t dealt with and the ball fell for Rovers’ midfielder Bone who blasted a low right-foot drive to the net.