From Scolari to Pellegrini: how did the big-name coaches fare in China? 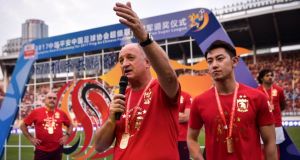 Fabio Capello caused quite a stir when he arrived at Nanjing Airport in June. You just don’t see very many septuagenarians wearing jeans with matching blue glasses in China, but this was just another world-famous manager taking over a leading Chinese Super League team.

There are others who have just finished the 2017 season: Luiz Felipe Scolari, André Villas-Boas, Manuel Pellegrini and Felix Magath. We can hazard a good guess what the Chinese equivalent of Sam Allardyce makes of this foreign influx, but their collective fortunes in China contain plenty that is sweet and sour.

Scolari will be the happiest. The Brazilian won the title with Guangzhou Evergrande Taobao, his third since arriving in 2015 and the club’s seventh in a row. Compared with the team of Marcello Lippi, his predecessor, Big Phil’s Guangzhou have become more functional, but the lack of a sustained challenge from anyone else meant the manager’s biggest problem was the summer departure of Paulinho to Barcelona.

The Brazilian arrived in the city formerly known as Canton from Spurs two year ago and soon became the best and most consistent performer in China and probably Asia. Losing him to Barcelona may have been a powerful riposte to the charge that China was a semi-retirement home for the greedy, but it left a hole in midfield.

“This club can cause car accidents”

With Paulinho perhaps the Reds would not have lost the first leg of their Asian Champions League quarter-final 4-0 at the home of their fierce rivals Shanghai SIPG, the low point of the season. All the stops were pulled out for the return match. Three accidents held up the Shanghai team bus on the way to the game. Even stranger, according to Villas-Boas, the visitors’ manager, they involved the same vehicle. He fumed: “This club can cause car accidents.”

And almost major upsets, too: Guangzhou came back to win the second leg 4-0 after normal time, although Shanghai squeezed through on penalties. Scolari will not be there next season – Fabio Cannavaro left Tianjin Quanjian this week to take Big Phil’s place at Guangzhou, after his brief first spell at the club, in 2014-5 – and it remains to be seen whether Villas-Boas stays for a second season.

Under the Portuguese manager Shanghai have improved – but not by much. In 2016 Shanghai dispensed with Sven-Göran Eriksson’s services after finishing third in the league and the last eight in Asia. This time Villas-Boas delivered second and the last four. This was after signing Oscar from Chelsea for about €60 million and having a fit Hulk.

The latter was the more impressive performer, but Shanghai may have done better had Oscar not been banned for eight games in the middle of the season. It was caused by a fairly innocuous kicking of the ball at an opponent, more serious for the huge brawl it sparked than the act itself. Villas-Boas, Hulk and Wu Lei, the first Chinese player to hit 20 league goals for 11 years, also had two-game bans for wearing T-shirts with messages of support for their team-mate.

Villas-Boas, not shy of voicing his opinions about Chinese football, referees and the federation, has been hit by further bans, which has the media questioning whether he was sufficiently focused on the team. The season hinges on the upcoming Chinese FA Cup final with their rivals Shanghai Greenland Shenhua and the newly svelte Carlos Tevez.

The highlight of the Argentinian’s troubled campaign was a 4-0 defeat of Jiangsu Suning on the opening day. Jiangsu, last season’s runners-up, never recovered – and in June called Capello. The former England manager is not used to relegation battles and did not start well. No goals in his first three games saw the Nanjing team hit rock bottom, but there was enough attacking talent with the Brazilian duo of Alex Teixeira and Ramires, Roger Martínez of Colombia and the inspired midseason signing of Benjamin Moukandjo, the Cameroon international, to get the team out of the trouble. The failing of others also made it easier.

Capello has one more year on his contract, and only then can his time in the east be properly judged. Should the Italian stay – and that is not a given, with rumours sending him back to Italy – his role model should be Magath. A year before Capello arrived the German took over Shandong Luneng Taishan after their previous coach, Mano Menezes, had plunged the team into a relegation battle.

There were no reports of cheese, tofu or rice being used to heal players, although there was some initial disquiet about his notoriously torturous training methods. The Brazilian striker Diego Tardelli tweeted, “Coach Crazy!! Football has changed, we are in the XXI century,” but the Chinese players, encouraged by the club hierarchy, seemed to respond to the German’s disciplinary approach after the more laid-back style of his Brazilian predecessor.

With a well-organised defence and dangerous attackers, such as Papiss Cissé and Graziano Pellè, this season went much better and featured a challenge for a Champions League spot before Shandong settled for sixth.

On the final day, Tardelli, still with the team, scored a hat-trick in a 5-4 win over Hebei China Fortune. That defeat cost Pellegrini and Hebei a first ever place in the AFC Champions League. Hebei started and ended the season well, but a midseason run of one point from seven games did the damage despite the excellent form of the Argentina striker Ezequiel Lavezzi, who ended up with 20 goals.

The former Everton midfielder Li Tie may allow himself a small smile of satisfaction at that. He took Hebei up in 2015 and had them in fifth past the midway point last year when he was replaced by Pellegrini. Considerably more expensive, the former Real Madrid and Manchester City manager has taken the team just one place higher. The debate about whether all these famous managers are worth their salaries will continue, as will the high-profile arrival at various Chinese airports before the start of the 2018 season. – Guardian