Joanne O'Riordan at the Aviva Stadium 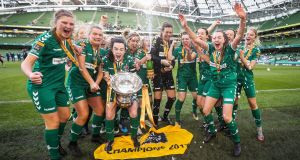 Comebacks are often bigger than setbacks. Any supporter in Cork will happily tell you how suffering is in our genes. To quote Mrs Doyle ‘Maybe we like the misery’. No one has probably suffered more than the Cork City Women’s team. Just six years ago they were formed. Those six years have been filled with some highs and a lot of crushing lows.

In 2011, their squad contained some quality players, most notably NWSL and Irish sensation Denise O’Sullivan and current stalwart Clare Shine. Unfortunately, Cork City have flirted with last place more than the dizzying heights of glory.

Aspirations and hopes were high, but the 2013-14 season proved to be their worst season to date. In 21 matches, they recorded 0 points and scored only two goals, while conceding 109. Their season ended with their ugliest defeat of the campaign – a 13-0 loss to Peamount United.

In 2015, however, things were looking up. That October, they faced newcomers Kilkenny United. Goals from Stacey Paul and Maggie Duncliffe saw Cork prevail 2-1. The scoreline reflects what the game was; tense, hard-fought, but overall it’s the scrappy wins that give you the confidence needed to push forward.

And push forward they have.

In the 2016 campaign, the club finished sixth out of seven teams in the Women’s National League, after acquiring nine points from 12 games along the way.

While Cork City has finished fifth this season in the league, they have earned a much-improved tally of 22 points. They also found themselves punching above their weight throughout the FAI Women’s Cup competition, beating Peamount United in the quarter-finals followed by Wexford Youths in the semi-final, with the latter being crowned league champions on Saturday night after a 2-0 win at home to Peamount.

But, like everything in Cork, we always feel the need to stand tall and cast a shadow on others.

In a poorly attended final – minus the Rebel Army ultras coming in towards the end – Cork City Women lifted their first bit of silverware on Sunday. While Nathalie O’Brien and Duncliffe stood out at the back in particular, it was the match-winner Clare Shine who will pick up the plaudits. Her ice-cool finish in the 33rd minute was enough to see the Leesiders prevail.

While UCD Waves will be disappointed, they really only have themselves to blame. Possession without penetration and lack of inspiration in the final third proved to be the difference. But, there are positives for them too. Midfielder Chloe Mustaki dictated midfield, but it was really in the final third where they lacked.

And so, while UCD Waves have won three out of their four meetings so far this year, it is Cork City who had the last laugh, winning the prestigious silverware in front of the green and white army on an historic day for the club.

In what was a day packed full of emotion, where Seán Maguire and Kevin O’Connor sat among fans to watch the Cork City men claw their way back to win on penalties. It was ugly, it was woeful, but as a City fan it was absolutely spectacular. Plenty of times hope was lost and fans gave up. But, when you have soldiers like Alan Bennett, who’s about 80 in football years, playing a full 120-plus minutes, it’s incredibly hard to lose faith. Where there’s 99 per cent faith, there’s one per cent chance.

Prior to this game Achille Campion became ‘one of those signings’. He exists, he comes on and yet on a night where all hope was lost, he showed strikers instinct and poached a goal. A real striker’s instinct to poke home the equaliser. His name means champion and now he is.

Kieran Sadlier, what can I say about him. Throughout the season he was played, dropped, played and dropped again, but that penalty was as cool as you like. Especially from a player who could have lost all hope.

What happened after that? Well, all I can tell you is that professionalism went out the window. We laughed, we hugged, we cried. But, we did it together. Seán, Kevin and John Caulfield waved scarves into the night’s makeshift shed.

But, who can forget the new cult hero and rivalry starter Mark McNulty. He was booed, harassed, yet he had the last laugh.

Sometimes it’s all about the comeback not the setback. Sometimes it’s about the size of the fight in the dog, but one thing is for sure, Cork City had a lot of help from ladyluck. So while chants of Benno, McNulty, Seanie’s on fire rang out, you can’t help but feel sympathetic for Dundalk. This was stolen from under their noses. They’ll regroup and probably come back.

But all I can say for now is; ‘Champions of Ireland. We know what we are’.