Euro 2020 tickets: Unsuccessful application? Here's how you can still get tickets 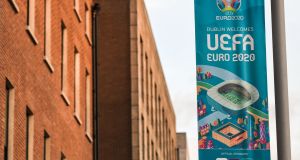 After a record demand of 19.3 million applications for the first Euro 2020 ticket ballot, fans found out on Tuesday if they were successful. The ballot opened on July 12th and ran until August 12th before successful applicants were randomly selected.

In total there were 1.5million tickets available in the first ballot for the tournament which will be played across 12 cities - Bilbao, Dublin, Glasgow, London, Amsterdam, Munich, Rome, Copenhagen, Budapest, St Petersburg, Bucharest and Baku. Here is all you need to know about how you can still get tickets.

I haven’t received an email yet, how do I find out if I was successful?

There was a delay in emails being sent out to applicants on Tuesday and Wednesday morning but Uefa have said that the ballot is now completed. Applicants can log on to the ticket portal here and check the status of their applications.

Is it still possible to get tickets for the Dublin games?

Dublin will host three group games and a last 16 game and there are still chances to get tickets for those if you were unsuccessful in the first ballot. Firstly, Uefa said in emails to all unsuccessful applicants to keep an eye on their inbox in the coming weeks as they expect a high number of cancellations meaning those tickets will then be distributed to fans who were unsuccessful initially.

Secondly, tickets for specific teams will go on sale via the second ballot in December after the draw is made and we know which teams are going. However, be warned that if Ireland do qualify and you look for tickets in that second ballot the FAI have said that supporters must meet the criteria set out which generally means season ticket holders will be first in line.

And do we know what cities Ireland will be playing in?

Yes, we do. In the group stages anyway. If Ireland qualify we will be allocated to Group E for which the host cities will be Dublin and Bilbao. That means that we will play two matches in Dublin and one in Bilbao. It also means we will be paired in the same group as Spain.

And what about the last 16?

Well, this is where it gets even more uncertain. Ireland’s potential destinations for the last 16 are Bilbao, Budapest, Copenhagen or Glasgow. Again, Ireland do have to qualify for the tournament first before any of this becomes applicable.

If I was successful what do I do?

Well, firstly you consider yourself very lucky. Secondly, you log on to your account on the Uefa portal here, check which tickets you were successful for and then go ahead and put in your card details to pay for them. Make sure to do this as soon as possible as Uefa only give a limited time to pay before the tickets are cancelled and passed onto another applicant. The prices for group matches in Dublin and Bilbao are €50, €125 and €185 depending on what category you were successful in.

Can I only pay for the tickets I want?

No, unfortunately not. While it wasn’t initially clear if customers could apply for as many games as they wanted and then pick and choose which to pay for, Uefa sent an email to all applicants shortly they applied to say that you would be obliged to pay for all of the tickets allocated to you.

And what if I get tickets but then cannot go?

That’s not a problem either. Uefa run an exchange portal for all major tournaments. Full details won’t be announced until early next year but it allows fans to sell on unwanted tickets for face value meaning, if you got a ticket for a game you didn’t want to attend, you might be lucky enough to exchange it for a ticket to one of Ireland’s matches. If Mick McCarthy’s men qualify, of course.

What game was most applied for?

Unsurprisingly that was the final at Wembley. In total Uefa received 1.3 million applications for the final to which only 43,500 tickets were available in the initial ballot.