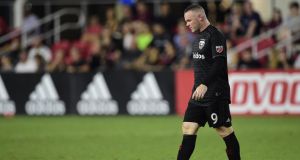 Wayne Rooney has confirmed he will next join Derby County as a player-coach. Photo: Patrick McDermott/Getty Images

Derby County have confirmed that Wayne Rooney will join as a player-coach on an initial 18-month contract in January.

The club’s manager, Phillip Cocu, said of the DC United forward: “Wayne Rooney is an extremely talented and top-class footballer. It is an exciting prospect for him to be joining Derby County and he can bring so much to this squad, both on and off the pitch. He has enjoyed a wonderful career, both in club football and for England, and he still has so much to give as well.

“His credentials speak for themselves. But to have a player with his leadership, skill, experience, character and work ethic will be huge for us. He knows what it takes to succeed as a player and I have no doubt he will have a positive impact right across the club.”

Rooney’s former England teammate Frank Lampard was given his first opportunity in management at Derby last year and Rooney said he is relishing the opportunity to take the first steps in his coaching career at the Championship club: “I am very excited about the opportunity that Derby County have provided me with. I am looking forward to joining Phillip Cocu, his coaching staff and the first-team squad from the start of January. I am sure I can make a big contribution and can’t wait to meet everyone, especially the supporters.

“I am equally excited to begin my coaching career at Derby County working with both the first team and academy.”

News of Derby’s interest in Rooney emerged shortly before they opened their new Championship campaign with a 2-1 victory at Huddersfield on Monday night. Pictures appeared on social media on Tuesday morning of the former Everton and Manchester United striker at Heathrow airport having flown in from Washington DC.

“It’s literally only been a couple of days in the offing,” the Derby owner, Mel Morris, told TalkSport. “The starting point was that we understood he was keen to return to the UK and we decided to see if we could do something off the back of that.”

Rooney joined DC United last summer on a three-and-a-half-year contract after one season back at his boyhood club Everton, where he started his glittering career.

Bringing in a player of Rooney’s stature has raised questions about the cost of the deal and the wages he might be paid, but Morris allayed any financial fair play fears. “We’ve maintained all along that we want to be compliant with FFP and I don’t see anything in this deal that would change that.”