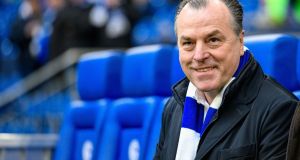 Schalke chairman, Clemens Tönnies: Suggested money from tax increases would be better used financing 20 power plants a year in Africa. “Then the Africans would stop cutting down trees, and they would stop making babies when it gets dark.” Photograph: Sascha Schuermann/AFP/Getty

German third division team Chemnitzer FC have parted ways with their captain after accusing the player of “openly displaying” his sympathy for neo-Nazi groups among the club’s supporters.

Star striker Daniel Frahn, who missed Saturday’s away game against Hallescher FC due to an injury, had chosen to watch his side’s 3-1 defeat from the stand rather than the team bench, seated next to leading figures from the far-right hooligan scene.

Former RB Leipzig player Frahn (32) was already fined by the club in March this year after joining in on a tribute to a deceased far-right activist and known hooligan by holding up a black T-shirt bearing the slogan “Support your local hools”.

At the time, the player had apologised, saying he had acted “in solidarity with the relatives” of Thomas Haller, a co-founder of far-right group HooNaRa (“Hooligans, Nazis, Racists”), knowing that the T-shirts had been sold to help pay for his medical care. “I didn’t know that that T-shirt was so widespread in the Nazi scene,” he said.

In a statement released yesterday, the club described Frahn’s show of remorse as a “farce” and said it had been wrong to trust his words following the incident earlier in the year.

“He could not and would not live up to the responsibility of the player and team captain of a football club, which involves more than scoring goals and letting yourself be cheered by the crowd: namely, attitude,” said Romy Polster, deputy chair of Chemnitzer FC’s shareholder meeting.

The divisions at the scandal-hit third division club, who are second from bottom in Germany’s third division after three games and face bankruptcy due to crippling debts, have become symptomatic of Chemnitz’s wider problem with far-right movements.

Last August, the city in the formerly socialist east German state of Saxony saw two days of far-right violence that left several people injured. In the wake of the riots, Chemnitzer FC said on Monday the club saw itself “duty-bound to be a bulwark against right wing extremism”.

Meanwhile, Schalke chairman, Clemens Tönnies, is under pressure to resign following widespread condemnation of racist comments he made last week.

Speaking at a public meeting with 1,600 guests in Paderborn, the 63-year-old criticised tax increases designed to help to fight climate change and then suggested the money would be better used financing 20 power plants a year in Africa.

“Then the Africans would stop cutting down trees, and they would stop making babies when it gets dark,” Tönnies has been quoted as saying – a statement which later prompted an apology.

“I am for an open and diverse society,” he said. “I am sorry for the comment on the large number of children in Africa. As chairman of the supervisory board of FC Schalke 04, I am 1,000% behind our club values. This includes the fight against racism, discrimination and exclusion. On the basis of that I expressly wish to excuse myself. It was wrong, rash and thoughtless and in no way in line with our values. I am very sorry.”

Yet despite the apology by Tönnies the German justice minister, Christine Lambrecht, has called for the German Football Association (DFB) to intervene.

“Racism must be loudly and clearly contradicted at every opportunity,” she said. “Nowhere is integration as successful and quick to work as in sport – that must not be put at risk.”

Dagmar Freitag, chairman of the sports committee in the German parliament, told the newspaper Welt on Sunday: “The fact that something like this is articulated by someone who holds a prominent position in sport makes things all the worse.”

Nikolaus Schneider has confirmed that the case will be discussed at the next meeting of the DFB ethics committee on August15th.

The son of a butcher who founded a meat-processing company that is now one of the biggest in Europe, Tönnies has been Schalke’s chairman since 2001 and is worth an estimated €1 billion. – Guardian

1 Gordon D’Arcy: If Farrell can tap into our self-worth, we’re all on a winner
2 Winds of change as Ireland name a refreshed team, picked on form
3 Who is Caelan Doris? Meet Ireland’s newest rugby star
4 Big paycheques lure the world’s best to Saudi Arabia
5 Sean O’Brien 4.0 - Leinster starlet ready for Under-20 debut
Real news has value SUBSCRIBE
Crossword Get access to over 6,000 interactive crosswords