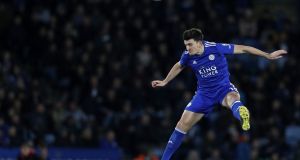 Harry Maguire: became the world’s most expensive defender when Manchester United signed him for a reported fee of €86m from Leicester City. Photograph: Adrian Dennis/AFP/Getty Images

In May, Ed Woodward asked Leicester City how much they wanted for Harry Maguire and was told €86 million. On Monday, the master of negotiation completed the deal, paying €86m finally to secure the centre-back six days before Manchester United’s first game of the season.

Perhaps such mockery is a little unfair – given interest from Manchester City did threaten briefly to push up the price – but only a little.

United have got their man but they would have been far better off getting him earlier so he could have a full pre-season, sweating his way through Ole Gunnar Solskjær’s taxing new fitness regimen and learning what it is to play alongside Chris Smalling. Beyond that, though, this seems like a move that makes a lot of sense.

At times towards the end of last season United fielded a back four comprising only players who had been at the club in Alex Ferguson’s time. They desperately needed to refresh their defence. Their board also seems to have made a decision at some point to focus on young players with Premier League experience but who are on the way up, rather than paying huge sums for pre-formed stars such as Alexis Sánchez and Paul Pogba.

Maguire fulfils the first criterion and just about answers the second. At 26 and with 20 caps, he is coming close to full maturity but is perhaps not quite there yet. And it is easy to see why Solskjær should have been so keen to sign him, why he did not want to turn to other options such as Toby Alderweireld or Kalidou Koulibaly.

It is not just that Maguire is an excellent defender, big and strong and good in the air. Or that he is adept at carrying the ball out from the back. Or even that he prefers to operate as the left of the two central defenders, unlike anybody else in the United squad other than Marcos Rojo.

It is the sense of control and authority he exudes. Even if he does not wear the armband Maguire is a leader, and this is a defence that in recent years has desperately needed leadership.

The fee has raised eyebrows, particularly when Alderweireld was available for €27m, and breaking the world record for a defender is not something United will have done lightly.

It may also be noted that United’s four costliest signings are now more expensive than City’s record (based on the euro value at the time of the deal). This is a perpetual problem for Woodward: everything he does looks ham-fisted by comparison with City who, whatever qualms there may be about the source of their immense wealth, have invested it with almost superhuman acuity.

But €86m is perhaps not so unreasonable. The record for the most expensive defender before Maguire was held by Virgil van Dijk who cost Liverpool €81m when, after a protracted pursuit, they signed him from Southampton in January 2018.

Van Dijk has excelled and his value now would be significantly in excess of that. Nobody could seriously dispute that, at least within the inflated world of modern transfer fees, he has been worth every penny.

Just because one expensive defender turned out to be worth the money, of course, does not mean that a slightly more expensive one will be. Nor is it the case that just because Liverpool were right to ignore other options to get their first choice United will equally be vindicated. But it is the case that the Van Dijk deal set a marker for a gifted centre-back just approaching the peak of his development.

United, presumably, hope that Maguire can have the same impact for them that Van Dijk has had for Liverpool and, that being so, it is not unreasonable that they should pay a similar fee.

But ultimately, all talk of the fee is fluff. If Maguire prospers, United could have paid double what they have and only accountants and financial fair play inspectors would care. If he fails, they could have paid half what they have and it would still seem disastrous. Maguire would seem to have all the attributes to be a success, but the bigger issue is the situation he is going into. Victor Lindelöf and, to a lesser extent, Eric Bailly arrived at Old Trafford with big reputations and struggled.

The evidence of pre-season is that Solskjær wants to press and operate with a high line, which given Maguire is a little cumbersome on the turn is an immediate concern.

Perhaps his positional sense will be enough to ensure that is not a problem but that then requires a good understanding with whoever plays at the back of midfield – on the evidence of pre-season, probably Nemanja Matic and Scott McTominay – an area in which United’s squad remains light.

An understanding, of course, would have been rather easier to forge with a full pre-season. What that is worth is almost impossible to evaluate, but if a lack of understanding at the back costs United on Sunday against Chelsea, direct rivals for Champions League qualification, the odd €5m here or there might not seem too consequential. United may have got the right man but you cannot help but wonder why it took them so long to do so. – Guardian