Tottenham eye Dybala as Eriksen is linked with United 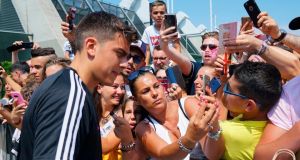 Juventus’ forward Paulo Dybala poses for pictures with fans as he leaves the training ground in Turin . Photo: Tino Romano/ANSA Via AP

Tottenham are preparing a €70m bid for Juventus’s Paulo Dybala and have also been offered the chance to sign Barcelona’s Coutinho on loan.

The Serie A club are willing to consider the sale of the talented but inconsistent Argentinian but are holding out for around €76m for the 25-year-old. A much bigger problem for Spurs would be to agree personal terms with Dybala.

The Argentinian is earning more than €325,000 a week at Juventus before tax and would not want to earn less at Spurs. A further complication is his image rights, which are expensive, as well as agents’ fees of up to €13m.

Spurs are also one of the clubs who have been sounded out on whether they would be interested in signing Philippe Coutinho on loan. The Brazilian is considering a move away from Barcelona for the new season and the player’s representatives have made contact with several clubs, including Arsenal, to see whether there is any interest in the player who left Liverpool in January 2018 in a deal worth €142 million.

Manchester United were also interested in signing Dybala this summer but walked away from the deal when the total cost became apparent. The Argentinian would prefer to stay at Juventus but the Italian champions are keen to offload him because of his high wages.

The Tottenham manager, Mauricio Pochettino, is a huge admirer of Dybala but he too realises that it will be very difficult to get a deal over the line before Thursday’s deadline.

Tottenham would have to sell Christian Eriksen, possibly to Manchester United, in order to finance the Dybala deal. Eriksen has just one year left on his contract and could leave for free next summer. Juventus are not interested in signing the Dane as any part of a deal for Dybala.

Spurs have already broken their transfer record this summer with the signing of Tanguy Ndombele from Lyon for €60m. Despite this, Pochettino recently said that his job title should change from manager to coach as he has very little input into transfers.

“I am not in charge and I know nothing about the situation of my players,” he said after the 1-0 friendly win over Real Madrid last week. “I am only coaching them and trying to get the best from them. Sell, buy players, sign contract, not sign contract – I think it is not in my hands, it’s in the club’s hands and [chairman] Daniel Levy.

“The club need to change my title and description. Of course I am the boss deciding the strategic play, but in another area I don’t know. Today, I feel like I am the coach.”

Tottenham start their Premier League campaign against Aston Villa on Saturday. The Premier League transfer window closes at 5pm on Thursday whereas Serie A clubs have until September 2nd to conclude this summer’s business. – Guardian

Patrick Reed battles his way to second WGC title with Mexico victory 00:34
Antonio Rüdiger says racism has won after boos at Spurs 22:30
Eddie Jones’s comments have already provided Irish team-talk for 2021 22:00
England held all the aces in defining battle of the breakdown 21:00
TV View: Sunday Bloody Sunday . . . Not Bono’s fault but Boy, that was Bad 19:59

1 England 24 Ireland 12: How the Irish players rated at Twickenham
2 Ireland suffer Twickenham torture yet again as England dominate
3 Eddie Jones’s comments have already provided Irish team-talk for 2021
4 TV View: Sunday Bloody Sunday . . . Not Bono’s fault but Boy, that was Bad
5 England held all the aces in defining battle of the breakdown
Real news has value SUBSCRIBE