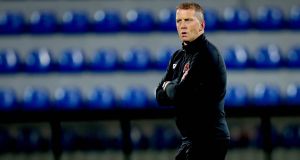 Dundalk head coach Vinny Perth: ‘We’re not going over to shut up shop but at the same time we have to be respectful of their front line.’ Photograph: Ryan Byrne/Inpho

Dundalk head coach Vinny Perth has stressed the importance of scoring when his side face Slovan Bratislava in their Europa League third qualifying round first leg tie at the Tehelné pole stadium tonight.

In four European matches this year to date against Riga FC and Qarabag, Dundalk have managed just a single goal through Patrick Hoban. They also failed to score in their last two matches of last year when they drew 0-0 with AEK Larnaca before losing 4-0 in the second leg in Cyprus.

With this tie seeing Dundalk play the second leg on home soil at Tallaght Stadium next Tuesday, Perth believes it will suit his side to go away first and he feels scoring against Jan Kozak’s side will be crucial if they are to make the play-off round against the losers of either PAOK or Ajax.

“Away goals are huge in Europe,” he said.

“We’re not going over to shut up shop but at the same time we have to be respectful of their front line.”

Asked what would realistically be a good result in the Slovakian capital, Perth said: “I think scoring. No matter what once you score I think it’s massive. You can lose the game but if you score it’s a massive advantage.”

The 43-year-old said playing away from home in the first leg on this occasion would suit his side.

“It’s much better definitely. I don’t think we would have lost 3-0 in Qarabag if we had a home tie in the second one.

“It definitely suits us that way that we know what we have to do in the second tie. It works both ways because we’ve had teams come over and shut up shop but it’s definitely an advantage,” he said.

Despite the disappointment of last week’s Champions League exit away to Qarabag, Perth said the result was firmly behind them.

“We moved on very quickly after the game,” he said.

“Everything is focused on the Europa League now. It’s half-time in Europe and we would have prepared the players for that.

“We can’t be too down if we lose to the likes of a Qarabag or APOEL. We’ve prepared them for this and we’re in a good place.

“Our challenge is to be in the play-off for the Europa League regularly. That’s what I think is achievable over the next couple of years for Irish clubs and then the group stages comes after that.

“I don’t think we’re ready to be regularly in the group stages of the Europa League. I think the standard is just too high. I think Qarabag are on the next level where they are competing for group stages. Their aim is probably the Champions League and if not the Europa League but they’re probably about two stages ahead of where we want to get to. We want to be in the play-offs at a minimum over the next year or two and then build from there. They’re heady heights but that’s what we want to achieve,” said Perth.

1 Owen Doyle: Creeping professionalism of schools rugby a threat to the game
2 GAA officials and referees brace themselves as new rules kick in, and this time it's for real
3 Niall Quinn happy to step into the breach at FAI
4 Caroline Wozniacki’s career ends with defeat to Ons Jabeur
5 Scotland’s Finn Russell missed training after Sunday drinking session
Real news has value SUBSCRIBE
Crossword Get access to over 6,000 interactive crosswords