Ken Early: Lethargic Liverpool may have turned up just in time

Taking the plaudits is great, but now it’s time for City and Liverpool to get back to work 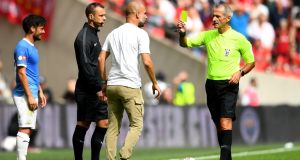 It’s 18 years since Liverpool beat Manchester United 2-1 to win the last ever “Charity” Shield, and their manager that day, Gerard Houllier, was one of the first to try to pass it off as a “trophy”. Now the match is called the Community Shield, and all the managers talk about it as though it is a trophy, which old-timers regard as yet more evidence that the game’s gone.

Most players these days are too young to remember the Charity Shield days, and judging by the Manchester City players’ celebrations after Gabriel Jesus scored the winning penalty in the shootout on Sunday at Wembley, most of them have come around to the managers’ point of view.

City certainly looked like a team that felt like they’d just won a trophy. But maybe it wasn’t the shield that counted so much as the burgeoning rivalry with Liverpool, and the sense that City have held on to their edge.

These two teams spent the summer basking in the afterglow of success after each won one of the two trophies every big team is aiming to win. The mission for both of them this season is clear: now go and win the other one.

The difference is that City have been there before, and Pep Guardiola more than anybody. This is the third time he starts a season with the chance to win a third successive league title, and on both previous occasions his players went on to complete the hat-trick.

It’s not that winning makes Guardiola more relaxed – on the contrary, he likes to crank up the pressure on the players with every trophy.

“In sport you need to be a bit wound up and tense,” he told Marti Perarnau. “Feeling satisfied and full of yourself can be very damaging. It’s constant movement and a bit of agitation that helps us maintain the right balance, not relaxation and downtime.

“That’s why you have to avoid getting too comfortable. And that’s why coaches have to give their players a kick up the backside every now and then.”

Guardiola’s fourth season at City might be the least comfortable yet for his players, and some of them are not going to like it, but that’s the intensity that has won him eight league titles in 10 seasons as a manager.

As for Jurgen Klopp, his squad is full of players for whom the Champions League win was their first senior medal. Unlike some of the other big teams, Liverpool are not laden down with what Klopp has described as “mainstream players” – guys who have been hailed as superstars since their academy days.

Simon Hughes’ account of Liverpool’s recent history, Allez Allez Allez, details how Klopp believes a personal history like that “can cause problems” , and that players like Virgil van Dijk and Andy Robertson who had to fight for several seasons to get to a top club are often more grounded because “not everyone thought they were always that good”.

Can that groundedness survive success?

Klopp’s players are living in a different world since Madrid. The coach said last week that the biggest difference he has noticed since winning the Champions League is not so much in the attitude of his players – not that he’s had much time to spend with many of them given their participation over the summer in international tournaments.

The difference is in the attitude of everyone else. Previously the well-wishers just wanted a photo, but now they also want to congratulate you, tell you how much they love you, explain how and where they watched the Champions League final, and why it all meant so much to them.

Taking the plaudits is great and all, but now it’s time to get back to work. Liverpool may only have been one point behind City last season, but performance data suggests the gap should have been a few points bigger than it was.

And while City have improved their options by signing Rodri as a phased replacement for Fernandinho, Liverpool have made no major signings. They concluded that the squad is big enough not to need reinforcement; rather than buy improvement they expect it to come from players like Naby Keita, Alex Oxlade-Chamberlain, Adam Lallana and Rhian Brewster.

No margin for error

The problem for Klopp is that Guardiola’s teams leave you no margin for error. If Liverpool start slowly they could be out of it by the middle of September. This is probably why a manager who normally hates talking about tiredness has spent much of the last few weeks fulminating at the insane demands of the football calendar.

Sadio Mané played for Senegal in the final of the Africa Cup of Nations 18 days ago, and he only returns to training today (City’s Riyad Mahrez played for Algeria in the same match, but unlike Klopp, Guardiola has players of the quality of Raheem Sterling, Leroy Sané and Bernardo Silva to cover for him). Klopp knows Mané’s late return could cost Liverpool, and he also knows nobody will make any allowances for that.

If Klopp was worried before the Community Shield it’s hard to imagine he was feeling any better by half-time, with Rodri looking commanding in midfield and City’s forwards skilfully finding the spaces between Liverpool’s full-backs and central defenders.

An hour later Liverpool had lost on penalties but their manager was feeling much better. The unpleasant experience of being outclassed by their rivals had seemed to jolt his side out of their pre-season lethargy. In the second half they rediscovered the strength and energy of last season, knocking City out of their stride, seizing back control of the game.

By the end City were hanging on, with Kyle Walker clearing Mo Salah’s ninth shot of the game off the line in injury time. “We are still here, we can still play proper football, and I like that information today most,” Klopp said.

Liverpool may have turned up just in time.

1 TV View: Roy Keane but Daragh’s keener as Late Late fails to shoot the lights out
2 ‘Manchester United are lucky to have you’: Klopp responds to Donegal schoolboy’s letter
3 Ireland Slam England at the Gardens to open up Grand ambitions
4 Six Nations 2020: England v Ireland - England player profiles
5 Solskjær backs Martial to get 20 goals for Manchester United for first time
Real news has value SUBSCRIBE
Crossword Get access to over 6,000 interactive crosswords