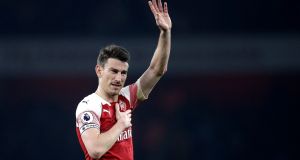 Arsenal’s Laurent Koscielny is set to join Ligue 1 side Bordeaux in a deal worth around €5 million. Photo: Adam Davy/PA Wire

The Arsenal captain, Laurent Koscielny, is on the verge of a return to France with Bordeaux after the clubs agreed a fee of up to €5m.

Koscielny is due to undergo a medical at the Ligue 1 club on Tuesday and, assuming that goes smoothly, will sign for Paulo Sousa’s side shortly afterwards. Personal terms are not believed to be a problem and it will bring an end to a nine-year spell in north London for the experienced centre-back.

In one way the move is a blow for Unai Emery on the eve of the new season, with Arsenal’s short-staffing at the back already an issue. But in another way it removes a significant problem from his hands as Koscielny made it clear this summer that he wanted to leave Arsenal.

That desire led to a dismayed Koscielny refusing to join Arsenal’s preseason tour of the US after the club refused to end his contract a year early and let him depart for free. Arsenal said at the time that they were “very disappointed” with the actions of a player who, since arriving from Lorient in 2010, has been a consistent and upstanding character.

But Bordeaux’s willingness to pay a fee has broken the deadlock between the parties and the 33-year-old Koscielny, who has made 353 appearances for Arsenal, now looks certain to get his move.

Arsenal will see defensive reinforcements as a priority and are interested in the RB Leipzig centre-back Dayot Upamecano, as well as Daniele Rugani of Juventus. – Guardian