Could Georgia cause an upset against Ireland in World Cup qualifier? 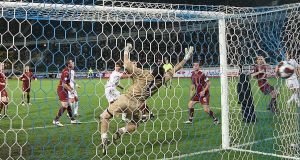 Scotland’s goalie Craig Gordon misses the ball during the Euro 2008 qualifier against Georgia in Tbilisi on October 17th, 2007, which Georgia won 2-0. Photograph: AFP 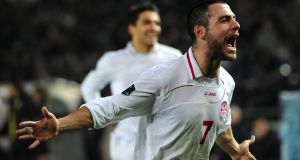 Georgia’s Jaba Kankava celebrates his team victory during their Euro 2012 qualifying match against Croatia in Tbilisi on March 26, 2011. Photograph: AFP 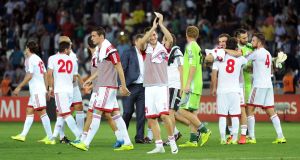 Georgian players celebrate their 1-0 victory over Scotland during their Euro 2016 qualifying in Tbilisi on September 4, 2015. Photograph: AFP

Having taken four points from their games in Belgrade and Vienna, Martin O’Neill’s side should, on the face of it, find things comparatively straightforward in Tbilisi with the Georgians firmly out of contention for qualification and playing to preserve their slightly dented pride.

Despite the general sense of disappointment that the team never qualified for anything when it had some outstanding players and struggles now, that it has none really, to do much more than avoid last place in its groups, Georgia has achieved some good results down the years with the draw in Cardiff last year, when many observers felt they should have won, right up there.

The Welsh, as it happens, know all about the misery that can accompany a trip to Tbilisi (that 1-1 is actually their best result against Georgia) but bigger names and better sides than that have travelled to the Georgian capital and come home empty handed as a brief review of their results since 1994 when they first took part in a qualifying competition shows.

Here are seven games that suggest a slip-up by Ireland in Georgia is, at least, entirely possible...

Okay, Wales weren’t up to much at this particular point in time and they headed to Tbilisi off the back of a defeat in Moldova but this was only Georgia’s third ever competitive game and yet the margin of the win was matched only Germany during the course of that group.

Temur Ketsbaia got two of the goals with Georgi Kinkladze, Shota Arveladze and the rather less well remembered Gocha Gogrichiani getting the rest. Seven months later they completed the double over Mike Smith’s side with a 1-0 win in Wales.

The Bulgarians were a serious team at this stage. They had reached the semi-finals of the previous year’s World Cup where Hristo Stoichkov had been one of the stars of the tournament, scoring six goals to win the Golden Boot and later adding the Ballon D’Or.

A few months before this game, they had beaten Germany at home and were in a real shout of winning the group but after Arveladze and Kinkladze had scored for the hosts, Stoichkov couldn’t save his side despite his goal eight minutes from time.

Just a draw this one but worth a mention as it effectively cost the Italians top spot in the qualification group. They had been in pole position to win it after beating England at Wembley but then ran out of goals.

Here, the likes of Christian Vieri, Gianfranco Zola and Filippo Inzaghi all gave getting the required winner a go and all came up short. The Italians then played out a scoreless home draw with the English while the Georgians wrapped up their campaign by beating Poland 3-0.

Ireland were in this group and the result might have played a big part in getting the team to the play-offs had they failed to beat either Russia or Switzerland at home then drawn away to Albania.

None of which would have mattered much to the 11,000 or so locals lucky enough to be inside the Lokomotiv Stadium where Malkhaz Asatiani’s early goal proved enough to earn the home side a celebrated victory. Against Ireland, meanwhile, the Georgians lost both home and away.

Alex McLeish fairly packed some highs and lows into his brief reign as Scotland manager. A few months before this game, his side had beaten France in Paris to go top of the qualifying group and had they got out of Tbilisi with three points, they were well on their way to the finals.

Instead, they were beaten with Levan Mchedlidze and David Siradze doing the damage with a goal in each half. The Scots suddenly found themselves having to beat Italy to go through. They didn’t and McLeish’s stint at the helm was over within the year.

The hosts came into this game unbeaten in a year and though they had drawn three of their opening four games in the campaign, there must have been a sense that they might finally compete, at least, for a place at a tournament finals.

It was certainly a strong Croatia side they beat that day with Ivan Rakitic, Niko Kranjcar and Luka Modric among the many well-known stars involved but Levan Kobiashvili’s last-minute goal decided it in favour of the locals who then managed to take just one more point – away to Malta – from their remaining five games.

Okay, no team has an excuse for underestimating opponents like Georgia but Scotland had less excuse than most given what had happened to them seven years earlier. Shaun Maloney was even still around to recount the horror of it all.

Gordon Strachan’s side had actually looked at the end of their draw in Dublin a few months earlier as though they had passed their big test and now had one foot in the finals.

A team that included the likes of Scott Brown, Alan Hutton and James Morrison came up badly short in Tbilisi, though, and Vako Kazaishvili’s strike seven minutes before the break proved as important as any scored by an Irish player in getting Martin O’Neill’s side to France.