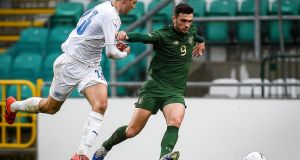 Troy Parrott in action for the Ireland Under-21 team. Photograph: Inpho

Four players have been called into the Republic of Ireland squad ahead of the Nations League match against Bulgaria.

Shamrock Rovers duo Graham Burke and Aaron McEneff come into the squad as well as Under-21 duo Troy Parrott and Jack Taylor.

Millwall forward, Parrott, who is on loan from Tottenham Hotspur, and the Peterborough United midfielder Taylor will now link up with the senior squad.

Jeff Hendrick has been ruled out of the Bulgaria match through suspension due to his red card against Wales. Jayson Molumby has also been suspended as he picked up his second yellow card of the Nations League campaign.

Forward Adam Idah has also been ruled out through injury and has returned to his club. While Stephen Kenny’s preparations for Wednesday’s clash took a further blow on Monday when it was announced that Matt Doherty and James McClean have tested positive for Covid-19.