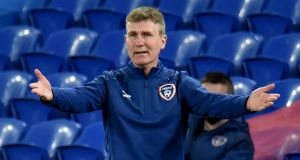 Stephen Kenny is still without a win as Ireland manager. Photograph: Peter Powell/EPA

Stephen Kenny remains confident that he is the man to lead the Republic of Ireland into next year’s World Cup qualification campaign despite having seen his side suffer another setback in what has been a deeply disappointing start to his spell in charge of the side.

In the wake of a 1-0 defeat in Wales on Sunday, the 49-year-old made it clear that he shares the frustration of his players and supporters with regard to results but described the challenges the team has encountered over the last two international windows as “unprecedented in modern times,” and argued that there will be sufficient talent to select from in 2021 for him to oversee a dramatic improvement in results.

“I have no doubts that I will be a success,” he said shortly after this game ended, “absolutely no doubts. I have a clear vision of what we want.

“Obviously, the circumstances, particularly in the previous camp but also in this one, have been quite unprecedented, in modern times anyway. Nevertheless the players have gone out and put in an impressive performance against a good Wales team.

“We didn’t create loads of chances but you’re not going to against a good team and we probably had the better chances aside from the last few minutes when they had two on the break.

“That’s how I see it. We have to dust ourselves down and get ready for Wednesday but for the World Cup campaign we’ll have Seamus Coleman, Enda Stevens and John Egan back; James McCarthy too and then attacking options like Callum Robinson, Aaron Connolly, Alan Browne. an emerging Troy Parrott coming into what we’ve got. That will all give us a lot of encouragement.”

With Bulgaria to come on Wednesday, it may yet get worse for him before it gets better and the team has already set a new Irish record for a run without a goal, with six games and 570 minutes played since the injury-time equaliser in Sofia.

Like so many of his team mates, Robbie Brady says they will come again in the end but like a few of other players too, his frustration over the current run is fairly clear.

“It’s difficult,” he says, “you know how it is. Once you have a few bad results, people start talking and the pressure builds, it’s just one of those things we have to deal with. But we all have enough games under our belt. Please God we get a win Wednesday and we can push on from there.”

Inevitably, he pointed to the couple of clearcut chances Ireland created here, one of them a shot of his own that flew just over, as evidence that the scorelines are at least a little misleading.

“You just take whatever positives you can out of the game and you try to take them into the next game. We are not getting the luck of goals at the minute, but I’m sure they’ll come.”

In the meantime, he says, the players remain committed to making the new approach work and positive about the man behind it.

“It has been really positive since he’s come in,” insists the Burnley midfielder who started in Cardiff and did quite well until being replaced in the second-half. “He has put his ideas across to us and the lads have bought into it. Obviously the goals haven’t come yet, but if we score a few it’s a different scenario.

“There are definitely positives to take from it and once everyone is pushing in the right direction, I’m sure there are good times ahead.”

Wednesday would be a good time for them to start rolling but while Bulgaria would normally seem very beatable Kenny’s options were narrowed still more here with a booking for Jayson Molumby and the late sending off of Jeff Hendrick ruling the pair of them out of the game in Dublin.

Defeat would end any lingering hope that Ireland might be a second seed in the World Cup draw and a draw is required just to prevent the team being relegated to the third tier of the Nations League.