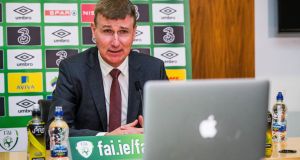 Stephen Kenny says that David McGoldrick retired from international football after losing his place at club level in the wake of playing through an injury for Ireland in the Euro 2020 playoff in Slovakia.

“He had an injury that he played with Slovakia,” said the Ireland manager as he named his squad for the forthcoming games against England, Wales and Bulgaria. “It was in the groin area, the abductor, and it affected his training. It affected his training and he lost his place at Sheffield.

“It’s unfortunate, because he was excellent in the games he played for us and he could have made a real impact for us but he has reasons and I respect those reasons.”

“He’s a terrific guy as well,” the Dubliner continued, “but he’s at a stage in his career . . . he’d have been 35 when the World Cup came around and he has made his decision. He could have made an impact in these three games but look, it opens up opportunities for other players.”

With McGoldrick gone, Kenny has recalled Luton Town striker James Collins to his initial squad of 26 for this month’s games.

The 29-year-old, who last featured under Mick McCarthy, scored his second league goal of the season at the weekend away to Rotherham, bringing his tally in all competitions to five in eight games.

In addition to Collins, Kenny has included Ronan Curtis and Daryl Horgan as attacking options but both Seani Maguire and Shane Long are omitted from the squad at this stage.

There is less upheaval in other areas although Séamus Coleman returns after having missed last month’s games through injury, as does Harry Arter, while Jack Byrne retains his place in the group despite having been laid low by coronavirus which he tested positive for while on international duty at the start of October.

Asked about the decision to take on the England friendly when targeting a win over lesser opponents might have been the more obvious option, given the importance of Ireland’s Fifa ranking ahead of the World Cup qualifying group draw, Kenny said that he preferred playing a team Ireland would improve by playing.

“We could have tried to get a really lowly ranked team and looked to get some goals under our belt but we didn’t; we took on England,” he said. “I want the team to develop, we want the team to improve and we don’t fear anyone so these are good games to play in. We want to improve and these sorts of games give us the opportunity to improve before the World Cup qualifiers next year.

“It [the ranking] is not something I’m fixated on. We need to focus on our own performances and everything else will take care of itself.”

Ralph Lauren ends Justin Thomas sponsorship over homophobic slur 11:44
Limerick dominate All Stars with 14 nominations 07:00
All-Ireland League still on ice as clubs try to keep the fire burning 06:00
A man before his time – Hain’s heroic role in the history of anti-racist politics 06:00
Matt Williams: A Lions tour in a raging pandemic would be more than folly 06:00