VAR denies Dendoncker and Wolves in goalless draw at Leicester 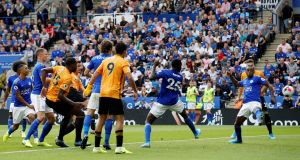 Neither of these sides will turn their nose up at a point prised from decent opponents, but both have cause to be frustrated by their opening game of the domestic campaigns.

Leicester will be unsatisfied at how few chances they created despite having most of the ball. Wolves can regret not making off with a victory after wasting a couple of clear opportunities and having a goal by Leander Dendoncker contentiously disallowed after a review by VAR.

Wolves had deployed a strong team in Armenia on Thursday and nine of the players who began there were included in the starting line-up here. Would they be sharper than the hosts by dint of having played three competitive matches already this season, or would the strain of those excursions tell on a side that only arrived back from Yerevan early on Friday morning?

Nuno Espirito Santo got the answer he was looking for at first, as his team made the brighter start. They were quicker to the ball and seemed more in synch with each other.

Leicester, by contrast, began sluggishly and were a little disjointed. It was 10 minutes before they cobbled together a move worthy of the name. After that they gradually found a groove and earned the majority of possession without doing much with it.

Brendan Rodgers spent the summer trying to cultivate the more incisive style he began introducing after replacing Claude Puel as manager in February but the team’s problem here was a familiar one – they were not quite slick enough in their play and toothless once the opposition shackled Jamie Vardy.

James Maddison and the summer recruit from Newcastle, Ayoze Perez, flitted about on either side of Vardy in a 4-3-3 formation, with Youri Tielemans tasked with pulling strings in midfield on a platform secured by Wilfred Ndidi and Hamza Choudhury. A nice theory, perhaps, but Wolves were not about to let the hosts put it into practice, so play frequently became bogged down in midfield.

All the Wolves goalkeeper Rui Patricio had to do in the first half hour was observe a couple of wayward shots from long range by Ben Chilwell and Ndidi plus a few crosses that his defenders rejected without fuss.

Wolves did not suffer a fright until the 38th minute. It took a miscued volley by Maddison to catch the visiting defence off-guard, as the midfielder’s shot unintentionally landed at the feet of Tielemans near the byline on the right. The Belgian fired the ball across the face of goal but Vardy did not react fast enough to turn it into the net from two yards. Too early in the season, perhaps.

Chilwell and Ricard Pereira, at least, made regular raids down their flanks, a few of which yielded corners or freekicks. But without the departed Harry Maguire to aim for, Leicester offered little threat from these. Maguire’s replacement, Caglar Soyuncu, performed competently enough in central defence but is not an aerial threat of the calibre as the man sold to Manchester United for £80 million.

Maguire’s absence was also evident at defensive set pieces. Leicester conceded fewer goals from these than any other team in the Premier League last season but they let one in here in the 53rd minute, only for it to be ruled out by VAR. The video replay showed that Dendoncker’s header from a corner had rebounded to him off the arm off Wily Boly – who was only inches away – before he lashed the bouncing ball into the net from six yards. Lucky Leicester.

The hosts were fortunate again a few minutes later when a bad attempted clearance by Jonny Evans led to Diogo Jota racing through on goal. The forward dragged his shot wide of the far post. Wolves were playing on the counterattack but scrounging better chances than Leicester were able to muster.

Harvey Barnes, a thrillingly anarchic runner at times, was sent on after the hour but could not make holes in the Wolves backline. He brought a routine save from Rui Patricio in the 82nd minute with a tame shot from 20 yards and then, in stoppage time, finally showed real menace by swapping sharp passes with Vardy and pinging a cross into the danger zone. But Boly made an excellent clearance in front of his own goal. – Guardian