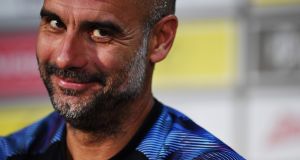 Manchester City manager Pep Guardiola has created room in the middle of the pitch for his exceptional midfield. He has literally made the game bigger. Photograph: Getty Images

It is overblown, over-exposed and over here. There are times when it seems everywhere, hell-bent on crushing other sports, even other divisions and competitions in its own structure. It is, as Jurgen Klopp said last week, back too soon. And yet even with these caveats, plus flaws and inequalities that will reveal themselves over the season, the return of the Premier League is an event. It is one the world will tune into.

Liverpool kicked it off last night at Anfield against promoted Norwich City and it is likely once again that the northwest will be the setting for the battle to be champions of England.

Liverpool, as all know, have never held that title in its Premier League incarnation. But Klopp’s team are the champions of Europe and although there have been gripes about the club’s lack of transfer activity, Liverpool, as Klopp also said last week, have scope for improvement.

“It’s not as if we outplayed all the teams,” he said of last season.

And there were games, notably against Everton and Tottenham at Anfield, when Liverpool’s margin of victory was narrow and nervous. The Reds won 10 league games by a single goal. Maybe Klopp had this in mind when he spoke of room to improve, a match like the 4-3 versus Crystal Palace.

More likely, though, and refreshingly, Klopp appears to think Liverpool have recruited so well over the past 18 months that this squad deserves the opportunity to grow organically. It is far from illogical to think that time spent together will gel the squad and take it upwards and there is no reason to suspect that Virgil van Dijk, Alisson Becker, Fabinho or Naby Keita are going to experience a sudden deterioration. The same applies to Trent Alexander-Arnold and Andy Robertson as well the trident attack. There is no reason for Liverpool to doubt themselves.

That, however, does not guarantee trophies. And Klopp’s players do face the unenviable concept of the glass ceiling. It is mathematically feasible that they could go higher than last season’s 97 points, but only the most demanding would consider that the expectation.

Liverpool could lose 10 per cent of that total and still win the Premier League. But that would require Manchester City to drop off and it is difficult to foresee a team prepared by Pep Guardiola declining to such a degree.

City actually lost four times in the Premier League last season, as opposed to twice the previous season when they were also champions. Their points tally dropped from 100 to 98.

City have lost Vincent Kompany (33), whose soaring winner against Leicester on that Monday night in early May was so crucial. But they have signed Joao Cancelo (25), another excellent midfielder in £62 million Rodri (23), and there is a further alteration to explain why City are odds-on to win a hat-trick of Premier Leagues: the goal-kick rule change.

Part of Guardiola’s enormous impact since becoming Barcelona manager in 2008 concerns his utilisation of space. He has stretched the game. By making his defenders drop deep to collect the ball and ordering his wingers to stay wide to receive it, Guardiola has created room in the middle of the pitch for his exceptional midfield. He has literally made the game bigger.

One consequence is that opponents, if they choose to try to close down City, have greater yardage to cover. The new rule on goal-kicks – the ball no longer has to leave the penalty area before a defender can touch it – means Guardiola’s defenders can drop even deeper and expand the pitch another 10 yards or so. It will mean an even larger area for opponents to press.

It may be that opponents will decide this is a poor use of energy. They could sit deeper themselves. That would pose a different question for City.

Guardiola is not the originator – he has listened and learned from Marcelo Bielsa for example – and other coaches have adopted this out-from-the-back style. But the new rule, almost three decades on from the back-pass change, brings total football ever closer and if there is one Premier League manager who understands it, it is Guardiola.

When, for example, you see Manchester United trying similar tactics, it is not automatic as it is with City, it feels copied.

Such changes can have dramatic effects, initially and over time. Famously it was Bill McCracken – from the Falls Road – who provoked the great offside law change of 1925. So adept was McCracken at catching attackers offside for Newcastle, the International Board cut the number of defenders required to work the offside trap from three to two. This aided attackers and scoring leapt; within three years Everton’s Dixie Dean had 60 in a season.

There was only one club who did not suddenly start shipping goals: Hull City. McCracken had become manager there.

An innate comprehension of an idea can have an immediate impact. It is therefore hard to see past City and Guardiola.

But they are likely to face stronger scrutiny from a trio of sources this season, as well as Liverpool. Leicester City and Everton are two of them but Tottenham are first.

Last summer Spurs made no signings and thought they would be out of Wembley in September. A curious season took in a home FA Cup tie in Milton Keynes and a Champions League final. Along the way Moussa Sissoko rose, Harry Kane got injured and Dele Alli flat-lined. It’s a big season for Kane and Alli.

Mauricio Pochettino has now got signings to help them. Tanguy Ndombele cost £56 million from Lyon. There is real excitement about him, but then there was with Keita at Liverpool last summer. Players need time.

But when Spurs added Giovani Lo Celso from Real Betis and Ryan Sessegnon from Fulham on Thursday, anticipation quickened again.

In regional terms, which matter to some, Tottenham should cement their place as London’s top club. There was a time when Arsenal would have been affronted by that but no more. Theirs was an odd first season post-Wenger, inevitably perhaps, and while they have made a notable signing in Nicolas Pepe from Lille, the memory of Chelsea’s 4-1 Europa League final victory lingers.

Eden Hazard scored two for Chelsea that night in Baku. This will be the first time since 2012 that Hazard has not been in blue. It is a hole to fill and how Frank Lampard does it, or is allowed the time to do it, will be intriguing. He has Christian Pulisic.

An opening game away at Manchester United is probably not what Lampard would have asked for. But that is not the terror it was once.

United’s last home game was a 2-0 defeat to relegated Cardiff City after which Ole Gunnar Solskjaer questioned his players’ fitness. He has some new ones in Harry Maguire, Aaron Wan-Bissaka and speedy Daniel James. He also has a version of Paul Pogba, but no Romelu Lukaku.

United ended up sixth in May, 32 points behind their poised neighbours. They did finish 12 and 14 points ahead of Everton and Leicester respectively but those two clubs look progressive and organised compared to United, who post-Ferguson may not have bottomed out.

Everton hammered United 4-0 at Goodison Park in April and need those kind of goal numbers. Teenager Moise Kean has been signed from Juventus and Richarlison has a year behind him. He is still only 22.

Newcastle United sold Perez on top of losing Rafa Benitez. Steve Bruce needs a fast start and might get it against Arsenal on Sunday at St James’s Park.

As ever, Newcastle will provide news. So too will Graham Potter at Brighton and Chris Wilder at Sheffield United. Aston Villa are back after three years away and by the time you read this there will probably have been a VAR controversy. We can understand Klopp’s reservations; the thing is, interest in England’s Premier League does not look to have peaked.