Premier League kick-off: The tweaks and key changes you need to get your head around 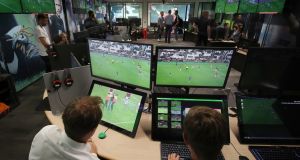 VAR is being introduced to the top flight leagues from the start of the new season. is season. Photograph: Chris Radburn/PA Wire

It’s probably accurate to say that not many of us are familiar with the workings of the International Football Association Board, their acronym IFAB making them sound like a body of people whose self-esteem is far too high. But the results of the rule changes proposed by the board when they met in Aberdeen in March of this year are about to be unleashed on football as the new seasons around the globe get under way, and while they won’t change the game utterly, some of them should have a significant enough impact.

Not all of the rule tweaking, mind, is momentous. Before we get to the meatier changes, here are some of the ones that might just pass you by:

Until now, the prize for winning the pre-match coin toss was getting to choose which end to attack, so if, say, you were the visiting captain at Anfield you’d make Liverpool play in to The Kop in the first half just to annoy them. But now toss-winning skippers will be able to opt for kicking off instead. IFAB say this is because the kick-off is now more “dynamic” and goals can be scored directly from it. Mind you, they always could be but –as even Pele would tell you – it’s not easily done.

The Colour of Undershirts

They must be “a single colour which is the same as the main colour of the shirt sleeve or a pattern/colours which exactly replicate(s) the shirt sleeve”. This, say IFAB, will help match officials’ “decision-making”. Or it could be that they just had too much time on their hands in Aberdeen.

The difference between the two, you’ll be relieved to hear, is now defined – in steamy weather, a drinks break will be for rehydration and will not exceed one minute whereas the purpose of a cooling break will be to allow the body’s temperature to fall and will last from one to three minutes depending on how hot it is. This will have little relevance on a February night in Leicester . . . but Qatar and the like? A whole different drinks/cooling game.

If, as looked semi-possible for a spell last season, Manchester City and Liverpool had finished level on points, goal difference and goals scored and conceded, then a play-off would have been required to decide the destination of the title. In the unlikely event of such a tie ever actually happening, the teams’ head-to-head record will now determine who ends up champions.

Now for the key changes that you will actually notice. Looking through them, you may conclude that referees will need eyes in the back of their heads – but they will have this season because VAR is being introduced to the top flight leagues.

“Football,” said IFAB, “does not accept a goal being scored by a hand/arm even if accidental”, so the key change here is that even accidental handballs will be deemed fouls if they result in the scoring of a goal or the creating of a goalscoring opportunity. There will, then, no longer be hand-to-ball, ball-to-hand debates in those circumstances, although there’ll be no end to the heated discussions about players making their bodies “unnaturally bigger” by outstretching their arms, even when they’re behind their backs. VAR, at least, will be available to referees to check for infringements not spotted.

From the new season the ball will be in play from a goal-kick the moment it leaves the goalkeeper’s foot, no longer having to leave the penalty area for it to be active. The goalkeeper can now play the ball from a goal-kick to defenders inside the penalty area, when no players could be inside the box when goal-kicks were taken before. Opposition players must remain outside the box until the ball is in play – if they haven’t time to leave it before the goal-kick is taken, they must not interfere with play.

You know the sight of attacking players inserting themselves in defensive walls and attempting to knock their opponents over like skittles just as the free is being struck? That’s now history. From this season, when three or more defending players form a wall, all attacking players must be at least one metre from it. Attackers’ presence in the wall, IFAB reckoned, was “against the ‘spirit of the game’” and often damaged its image. The chief impact of this rule change is that referees will probably need a measuring tape in their pockets.

When tensions were running high, the last thing kicked during a drop ball was often the ball, the competing players occasionally taking the opportunity to hoof their opponents in to row Z. No more. From this season, the last team to touch the ball before play was halted will be returned possession and restart the game – unless the ball is in the penalty area at the time, in which case the goalkeeper will restart play, regardless of who had possession when it was stopped.

Gone are the days when a substituted player can time-waste by taking an age to leave the field, sauntering across the pitch, adjusting shin guards as they departed, high-fiving all 10 team-mates, applauding supporters on the way, unless they were cheering his departure because he was muck.

Now players must leave the pitch “by the nearest point on the boundary line”, rather than heading for the halfway line, and must go immediately to the technical area or dressing room. If he fails to do so he will be booked – so if he’s already on a yellow, he’ll be substituted by nobody.

The changes here have already been trialled, causing a stir or two, for example, at the Women’s World Cup during the summer. Goalkeepers must remain on the goal line, without touching the goalposts, crossbar or net, until the penalty has been taken, and must have at least part of one foot touching the goal line – ie they cannot stand in front or behind it. The penalty will be retaken if any of those requirements are breached. The goalkeeper must also stand between the posts and face the penalty taker, said IFAB, which you’d imagine would be wise.

When the red mist descended, up to now, managers could be sent to the stands by referees, but from this season they can be shown yellow and red cards in the same way players pick them up. And if there’s the mother of all touchline scraps and the ref can’t identify the main culprits, the manager will be punished. This change may dissuade Jose Mourinho from seeking a return to the Premier League.

The cruellest rule change of all? We’ll go for the one regarding goal celebrations. Is there anything more mortifying for a player than when he celebrates a goal in quite an excessive and provocative way, only for it to be disallowed – at which point he is mercilessly mocked and jeered by half the stadium? Well, until now the one consolation was that he couldn’t be booked for, say, removing his shirt while celebrating a goal that was subsequently disallowed.

1 Connell losing touch with the club championship is the real tragedy of Normal People
2 Ghosts and goalposts: The soul of street football in Dublin’s Gloucester Diamond
3 Rugby clubs in crisis: ‘I fear a lot of players won’t go back playing at all’
4 Shane Ryan: Shark attacks and gruelling shifts on a Covid-free Atlantic mission
5 Ian O’Riordan: Dreaming of one-way cycling over the Military Road
Real news has value SUBSCRIBE
Crossword Get access to over 6,000 interactive crosswords