All in the Game: Hourihane has final say after achieving his Premier League dream

Sheridan still believing in miracles . . . fun and games in Serie A . . . summer awards round-up . . . quotes of the week 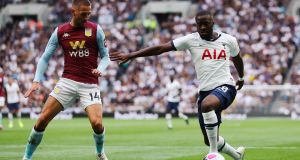 The week’s ‘Memory like an Elephant’ award goes to our very own Conor Hourihane who, after making his Premier League debut with Aston Villa on Saturday, replied to a tweet from a lad by the name of Craig Taylor which was sent in . . . . January, 2014.

Back then, when Hourihane was with Plymouth Argyle, Taylor tweeted this to him: “You’re Argyle’s best player kid, no danger, but the Premier League? There’s ambition and there’s reality.”

Hourihane’s reply back then: “Something to work towards every day, can I not dream?”

Taylor: “Of course. I think you’re a decent player and rate you but just being honest. I have limitations in my work too.”

Fast forward a whole five and a half years.

Hourihane: “Hi Craig, remember this tweet back in 2014? I always remember it to this day. Ironically you’re a Villa fan who I made my debut with! Never tell anyone they can’t achieve something.”

It was during the summer that Cillian Sheridan added yet another leg to his footballing world tour when he signed for Israeli side Ironi Kiryat Shmona. Before then, he’d had spells in Scotland – starting out with Celtic – England, Bulgaria, Cyprus, Poland and New Zealand. The lad is, then, well-travelled. (He’s still waiting for his fourth Irish cap, though. Remember his comment when Martin O’Neill was sacked? “As an Irish fan I’d love the FAI to go all out for Chris Hughton, but as a player trying to get in to the squad, I’d love if they gave it to my Dad”).

If you check his Twitter account you’ll see that he proudly posted a clip of his ‘initiation’ ceremony at Ironi Kiryat Shmona where, naturally enough, he sang ‘I believe in miracles’ in to a banana. “Show me a better initiation . . . I’ll wait,” he said. If you ever want to hire his singing talents he’s kindly provided the name of his agent (“For bookings contact Father Dougal McGuire”).

One club he’s unlikely to add to his playing CV any time soon is Norwich City. Why? Because they were “the first club I went to on trial when I was younger. So I always look out for their results. And hope they get hammered. They didn’t offer me anything,” he tweeted on Friday. How well did that go down with Norwich supporters? Not great. One of the few printable responses was “Its a miracle youve had some semblance of a football career so play nice”, to which Sheridan replied: “Why use a word like semblance but fail to use one comma?”

After fielding a torrent of abuse, the Cavan native concluded: “Judging by their sense of humour, it’s probably a good thing that trial never worked out.” He’s one of a kind, that lad.

The August 31st Serie A meeting between Juventus and Napoli in Turin is shaping up to be an even tenser affair than it might already have been thanks to Juve’s efforts to ensure no visiting fans attend the game. With no love lost between the clubs’ supporters, it wasn’t entirely unexpected that tickets would not be sold to Napoli fans, but Juve took it all a step further when they announced that anyone living in or born in the region of Campania, of which Napoli is the capital, would be barred from buying tickets.

This, Ciro Borriello, the sports minister for the Naples council, told Football Italia was “unconstitutional”, “excessive” and “racist”, “it is a discrimination that has profound roots in the hatred towards Napoli fans. Their behaviour is at the limits of legality”.

Indeed, Juve fans have got the club in trouble before, as have supporters of several other Italian clubs, for anti-Neapolitan chants along the delightful lines of “wash them with fire, Vesuvius wash them with fire” and references to the city’s residents being ‘cholera sufferers’. Mind you, the Napoli faithful haven’t been blameless themselves when it comes to chanting, neglecting, for example, to question Romeo’s nocturnal activities when they last played Verona, instead opting to target his girlfriend with cries of “Juliet is a tart!”

Any way, the chief awkwardness about Juve’s actions? Their manager, Maurizio Sarri, was born in . . . Naples. Presumably, though, he won’t be banned from the game. Although he’s unlikely to get a hug from Napoli captain Lorenzo Insigne who didn’t take the news that Sarri, who was Napoli manager before he left for Chelsea, had taken over at Juventus. “For us Neapolitans, that was a betrayal,” he said, “and it will be forever. A spicy relationship.

The award goes to the Liverpool Echo who greeted the news of Leroy Sane’s serious injury in a rather unfathomable manner.

Some time later: “We sent out a tweet earlier about Leroy Sane’s possible ACL injury which was inappropriate and struck the wrong tone. We apologise and the tweet has been deleted.”

Where’s that face-in-hands emoji when you need it?

Insult of the summer

The undisputed winner is Zlatan Ibrahimovic and his tribute to his fellow players in the MLS.

“MLS is not the level of Europe, to be honest. Before, I played with players either on my level or close to it. Here, I am like a Ferrari among Fiats.”

Lawsuit of the summer

We’ll go with the one Korean lawyer Kim Min-ki is taking on behalf of several clients against the organisers of a pre-season friendly between a K League All-Star team and Juventus in Seoul. Min-ki is looking for a refund on the cost of the tickets and compensation for his clients’ “mental anguish”. Why? Because Cristiano Ronaldo didn’t play. The presumably offended 11 Juve lads (plus subs) who did play should countersue for their own mental anguish.

That’s how many pounds English Premier League clubs spent on players before the close of the transfer window, just short of the 2017 record (£1.43 billion). Anyone claiming they forecast Aston Villa would be the biggest spenders (£137.5 million) is fibbing.

“I can’t really see anyone breaking in to [the top six], but I could possibly see Arsenal falling out of it.” – Joe Cole fails to spot a hole in his theory.

“He had these long legs, these go-go-gadget legs that came from nowhere – just when you think you’ve got past him, bang, he’s got you.” – Richard Shaw on how impressed he was by Aaron Wan-Bissaka’s extraordinary limbs when he worked with him in Crystal Palace’s youth set-up.

“Rodri will be incredible for us. He doesn’t have tattoos or earrings. His hair . . . he looks like a holding midfielder.” – Pep Guardiola on the Spanish international looking the part.

“I really miss football. I miss the adrenaline, the field, my job. I speak English, Spanish, Portuguese, French and Italian but right now I am studying German.” – Jose Mourinho issues a come-and-get-me plea to the Bundesliga.

“Barcelona are building a team like a cheat code in a video game.” – Antoine Griezmann reckons Barca’s summer shopping, himself being one of their purchases, will unlock a treasure chest of trophies.

“What a shit game to start with! First game City! Why? There are better games to build your confidence! Hopefully I will touch the ball! We will see.” – Sebastien Haller ahead of his debut for West Ham on Saturday. Hopefully he can rebuild his confidence after that 5-0 drubbing.

“If they paid that much for that guy [Kalidou] Koulibaly’s value is £250 million.” – Napoli president Aurelio de Laurentiis almost choking on his cornflakes on reading that Manchester United paid £80 million for Harry Maguire.

“There are two moments: our victory at the Olympic Games with Brazil and when we won against Paris with Barcelona. What we felt when we scored the sixth goal was incredible!” – Neymar further endearing himself to PSG fans by listing their 2017 6-1 Champions League drubbing by Barca as his joint favourite footballing memory.