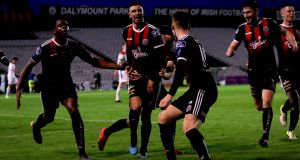 Danny Mandroiu inspired Bohemians in an extraordinary comeback win over Shelbourne at Dalymount Park to progress into the second round of the FAI Cup.

Trailing 2-0 to First Division leaders Shelbourne on 81 minutes, the Gypsies looked set for an early exit from the competition. However, after skipper Keith Buckley initially offered them hope in a frantic finale, Mandroiu grabbed a quick double to spoil the Shels party right at the death.

Bohs suffered semi-final replay heartache at the hands of Cork City last October, but will now have aspirations to go at least a step further in 2019.

Gypsies winger Danny Grant appealed for a penalty when he went to ground on seven minutes, only for referee Robert Harvey to book him for simulation.

Buckley angled an enticing diagonal pass towards Mandroiu just past the half-hour mark, but Shels netminder Dean Delany was first to the ball. At the end of a half that was ultimately devoid of chances, the sides remained deadlocked.

On the resumption, Andre Wright headed against the post off a precise Bohs cross before Conan Byrne spurned a glorious opportunity when Jaze Kabia released him on goal.

This was Byrne’s final contribution of the night as he was subsequently replaced by Ciarán Kilduff on the hour mark. Within two minutes of his introduction, the Kildare native calmly slotted past James Talbot at a left-hand angle to send the away supporters into raptures.

Bohs were almost back on level terms straight away, but Delany superbly tipped over a Buckley shot on the turn.

Delany previously enjoyed a three-year spell at Bohs and he once again denied his old charges when Grant was picked out in space. Nine minutes from time, Shels edged a step further to a magnificent victory when Shane Farrell unleashed a stunning strike into the left-hand corner of the Gypsies net.

The dismissal of Kabia for an off-the-ball incident left them hamstrung in the closing stages, though, and Buckley gave Bohs a lifeline with an outstanding curled finish. The home faithful had suddenly rediscovered their voice and there was pure elation when Mandroiu’s long-distance drive in the 88th-minute took a wicked deflection on its way home.

Although the prospect of extra-time was looming large, Bohs had other ideas. After a goalmouth scramble found its way to Mandroiu in stoppage time, the 20-year-old midfielder kept his composure to snatch a dramatic winner.

First division side Cabinteely were so close to dumping Cork City out of the FAI Cup but Ronan Hurley’s late, late equaliser helped to save the Rebel Army.

With the game 1-1 after 90 minutes at Stradbrook Road, extra time was required and Robert Manley’s goal on 94 minutes put the hosts ahead. But Hurley struck on 119 minutes to send the game to penalties. Cruelly, Manley’s opening effort for Cabo was saved by Mark McNulty and City scored all of theirs, Gearóid Morrissey with the clinching kick.

City led through a goal from captain Conor McCarthy on 20 minutes, not long after Garry Buckley had hit the post.

Cabinteely responded well, with Zak O’Neill going closest as McNutly saved, though Gearóid Morrissey was unlucky not to make it 2-0 for Cork.

In the second half, Kevin Knight’s long-range effort for Cabinteely needed a superb McNulty save and, while sub Joel Coustrain went close to a City second, the home side were getting on top.

They levelled when Knight bundled the ball home following a scramble after Paul Fox’s free kick and Keith Dalton nearly put them ahead in normal time, with McNulty saving.

Four minutes into extra time, Dalton provided the assist for Manley to fire past McNulty. It looked to have been enough, but Hurley saved City.

Teenager Glen McAuley was sprung from the bench to score his first goal for St Patrick’s Athletic who had to come behind to put First Division Bray Wanderers out of the FAI Cup at Richmond Park.

Dominant from the start, St Pat’s hit the woodwork through Darragh Markey and Simon Madden only to find themselves a goal down five minutes before the break.

Striker Dean Williams was first to the dropping ball to bundle it over the line to stun the small home attendance.

St Pat’s laid siege to the Bray goal from the restart, equalising on 55 minutes.

Centre half Dave Webster burst forward, got the return pass from Dean Clarke to drill a low shot to the net.

But St Pat’s were caught square at the back as Bray were close to regaining the lead on the hour.

Martin threaded Dylan McGlade in on goal to go around Brendan Clarke only to see his shot cleared off the line by Jamie Lennon.

This time McGlade cut in from the left to set up substitute Joe Doyle whose shot was parried by Clarke with Williams firing the rebound wide.

St Pat’s regained control to get their winner on 75 minutes.

And it was all 19-year-old McAuley’s own work as he slalomed in from the left to drive a low shot to the corner of the net despite Sava getting a touch to it.

Shamrock Rovers began their hunt for FAI Cup number 25 with a comfortable 1-0 win over Finn Harps at Tallaght Stadium on Friday night.

Dan Carr’s brilliant strike midway through the first half proved the difference as the home side coasted home against Premier Division opposition.

The Trinidadian striker curled home beautifully past Mark McGinley in the Harps goal after being set free by captain Ronan Finn during a game the Hoops dominated from start to finish.

Finn could have opened the scoring himself within three minutes as Carr’s shot fell into his path, but the former Dundalk man saw his header rebound back off the woodwork.

Aaron Greene had two excellent chances to seal it for Rovers, first shooting straight at McGinley and then blazing over, but the Hoops easily held out for victory.

Wexford Youths went so close to causing what would have been a major FAI Cup shock at the Brandywell but Brian O’Sullivan’s First Division side were punished by Derry City’s in-form hitman David Park just six minutes from time.

To be fair, the First Division basement side deserved to force this game into extra time but despite their terrific efforts they fell short having given a sensational display, remaining determined and disciplined until the final whistle.

Parkhouse, who had netted eight goals in his last four games, had been well marked by the visiting defence, but his finish was spectacular, the only praiseworthy statistic from a Derry point of view on the night.