Despite Wenger’s excuses, Arsenal’s finishing was shoddy and their defending flaky 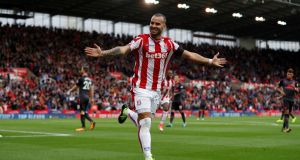 That did not take long. #WengerOut was trending across social media on Saturday night as Arsenal fans reacted to a familiar event, their team flopping at Stoke City. Arsène Wenger reckons it is too early to wail about the same old failings, however.

“Let’s not go overboard,” Wenger said. “We lost one game. I can understand that [disappointment] but overall I believe there were a lot of positives in the game as well because we created many chances. We had great domination and unfortunately we dropped three points.”

It would be much easier to accentuate the positives if Wenger had not grasped for an almost Trumpian conspiracy theory straight after the defeat when suggesting that he was not surprised that fouls on Héctor Bellerín and Danny Welbeck had not resulted in penalties for Arsenal. “We don’t get penalties, we know that. I can get the numbers, you will see. Look at the statistics: we had the highest penalties against us at home by a mile and the lowest for us.”

That is fake news. Arsenal did not have the highest number of penalties awarded against them at home in the Premier League last season: Watford had the same number (five) and Hull City had more (six). Nor did Arsenal have the fewest awarded in their favour: 10 teams got fewer penalties at home than Arsenal last season.

Perhaps Wenger was thinking of the 2015-16 league campaign, when Arsenal were not awarded any penalties at the Emirates Stadium? If so, that will not quell detractors who say the Frenchman is struggling to keep pace with events.

But why was Wenger complaining about the number of penalties awarded against his team at home after being denied penalties in an away match? (For the record, Arsenal were given two penalties in away matches in last season’s league campaign, which was more than Manchester United and the champions, Chelsea). Similarly Wenger’s contention that Alexandre Lacazette’s disallowed goal at Stoke was “100 per cent onside” was invalidated by replays.

The charitable explanation for Wenger’s skewed versions of events is that he is a sore loser. Another explanation could be that he wanted to erect a smokescreen to obscure his team’s failings. The most alarming explanation would be that he simply refuses to recognise reality when it does not suit him.

These are not new choices. Arsenal fans have been puzzling and arguing over them for years and Wenger’s eventual signing of a new contract earlier this summer does not seem to have changed that.

Has anything significant changed at Arsenal? The evidence from Stoke was not encouraging. Wenger was right to point to positives: Arsenal’s passing and movement was at times wonderful and the home team’s goalkeeper, Jack Butland, had to excel on occasions, as did their centre-backs. But Arsenal’s finishing was shoddy and their defending flaky. Not being clinical and not being solid is a recipe for not being title contenders.

In midfield Granit Xhaka gave the ball away too often while Mesut Özil was inventive with it but ineffective without it. Again one had to wonder whether standards are set high enough at Arsenal. Who should Wenger blame for that?

And what about Wenger’s selections? Those of his counterpart, Mark Hughes, paid off, as Jesé Rodríguez sparkled and scored on his debut, despite training only three times with his new side. The Spaniard’s goal came via a one-two with Saido Berahino, a substitute who made an impact. Wenger’s substitutions, meanwhile, were unsuccessful, with the withdrawal of Lacazette as Arsenal chased the game quite curious.

Arsenal had struggled to serve their £52.7m striker for most of the match but, having scored against Leicester City on his league debut, Lacazette gave another demonstration of his finishing skills when lashing a shot into the Stoke net in the 72nd minute, unaware that he was millimetres offside. He had drifted in from the right to “score”, having been shunted wide a few minutes earlier after the introduction of Olivier Giroud as a centre-forward. But Lacazette’s display of sharpness did not convince Wenger he was likely to strike again, so the manager replaced him with Theo Walcott with 12 minutes left.

“I wanted to put Walcott on because he can cross for Giroud,” Wenger said. Opta statistics show Walcott went on to send no crosses to anyone. Alex Oxlade-Chamberlain had supplied several dangerous crosses from his right wing-back role until his attacking influence dwindled after Wenger’s shift to a flat back four. Bellerín continually raced into threatening positions as a left wing-back but then either bungled or, on one occasion, was fouled when poised to shoot. Bellerín’s influence waned after the switch to 4-4-2.

All in all, things did not go to Wenger’s plan. The manager is right that this season is very young – but the problem is old. Wenger still relies on players who have never been reliable. Maybe they will eventually develop consistency and he will be vindicated. Believing in that requires deep faith.

At least Arsenal’s defence should be stronger when Laurent Koscielny comes back. And their attacking will be even better if Alexis Sánchez returns. Rumours continue to swirl about Manchester City buying the Chilean but Wenger says the player could face Liverpool for Arsenal next weekend. He warned, however, not to expect too much. “We’ll see how he goes through the week,” Wenger said.

“He was out with a muscular strain and hopefully he will survive the tests first before he comes back. He’s not played now for six weeks and it’s difficult to be at your best in the first game straight away.”