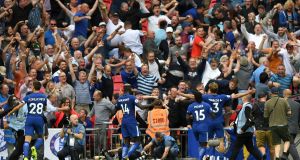 It has taken a little longer than they would have liked but, finally, Chelsea have reminded everybody else of the qualities that took them to the Premier League title last season. Their season has lift-off and, though it would be stretching the truth to say one result resolves all their issues, it still amounts to a hugely satisfying win, particularly bearing in mind they had finished the previous week’s encounter against Burnley looking in need of smelling salts.

Antonio Conte’s team have had to withstand an awful lot of scrutiny since capsizing against the team from Turf Moor. Their response was the kind of performance that should answer a lot of the questions about their character and powers of endurance. For a team apparently teetering on the brink of crisis, they proved here that they can still play a central role in this season’s title race.

The aberration against Burnley feels almost freakish given the story of their follow-up game. Conte’s team were subjected to long spells of prolonged pressure after Marcos Alonso’s elegant free-kick gave them a first-half lead. They then suffered the misfortune of their substitute, Michy Batshuayi, providing Spurs with an 82nd-minute own goal and, at that stage, the supporters who had decamped to Wembley from White Hart Lane might have thought the momentum was with their team.

Chelsea had different ideas and Alonso’s second goal of the afternoon was a personal ordeal for Hugo Lloris in the Spurs goal, making it a demoralising start for Mauricio Pochettino’s team in their temporary home. Spurs went unbeaten at White Hart Lane last season for the first time since the 1964-65 campaign. After one “home” game at Wembley, they have already been defeated and this result will merely enhance the theory that it is not going to be easy adjusting to playing at the national stadium.