Ken Early: Matic is not a top player and Chelsea have upgraded 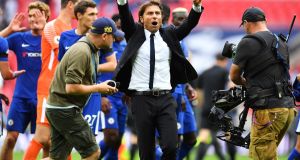 When Chelsea began the defence of their Premier League title by losing 3-2 at home to Burnley, a week after losing the Community Shield on penalties to Arsenal, the mighty narrative engines of the world’s most over-analysed league smoothly switched into overdrive. Were we witnessing a repeat of the great 2015-16 meltdown, when the defending champions lost nine of their first 16 league matches to ensure that Jose Mourinho was sacked before Christmas?

The narrative was a little strained from the beginning, not least because it overlooked the peculiar circumstances of the Burnley match. Chelsea were thrown off their stride by Gary Cahill’s early red card, and mounted such a stirring recovery in the second half that if Cesc Fabregas had been able to resist getting himself sent off with a few minutes to go, they probably would have fought back to 3-3. That was not the sort of performance we ever saw from Mourinho’s team in 2015-16.

Yet the question lingered, because if Chelsea were to collapse again, it would cast Mourinho’s meltdown in a new, more forgiving light. Was he perhaps not, as conventional wisdom would have it, the man chiefly responsible for what was then the worst title defence in Premier League history, but rather the victim of an essential design flaw in Roman Abramovich’s club – a great coach betrayed by the incompetence of unaccountable administrators who failed to provide him with the tools he needed to do the job?

This had always been Mourinho’s line – I told the club which players I wanted in April, and those players never arrived – and there was evidence that something along these lines might have happened again this summer. Conte had decided he could no longer work with Diego Costa. The centre-forward Chelsea originally wanted to sign to replace him, Romelu Lukaku, joined Manchester United, and while Alvaro Morata was an acceptable alternative for the striking position, nobody expected Nemanja Matic would be allowed to follow Lukaku to Old Trafford.

Many were surprised by the alacrity with which the club were prepared to sell Matic, a player who won two league titles in three full seasons as a Chelsea first-teamer, to a direct rival. But this was not out of keeping with the way Chelsea under Abramovich do their business. They have never had any major objection to selling good players to rival clubs: in recent years they have sold Daniel Sturridge to Liverpool, Petr Cech to Arsenal, and Juan Mata to Manchester United.

It’s doubtful he really believes Matic is a "top player", because when you compare him to many of the other midfielders Conte has managed, he’s not

But had the club undermined Conte by selling Matic against his wishes? The case that they had done so was buttressed by quotes from Conte describing Matic as a “great loss” and a “top player, very important for our team”.

The “Conte betrayed” narrative gathered steam when Matic slotted seamlessly into the Manchester United team, playing the simple sweeping-up game with which he made his name at Chelsea. Surely Conte could never have sanctioned a move of such self-defeating stupidity?

The alternative is that Conte’s words about Matic were nothing more than Conte being polite. It’s doubtful that he really believes Matic is a “top player”, because when you compare him to many of the other midfielders Conte has managed, he’s not. The Serb would not have got into Conte’s Juventus team, where the midfield usually consisted of Andrea Pirlo, Claudio Marchisio, Arturo Vidal and a younger Paul Pogba. At Chelsea, Matic was not at the same level as N’Golo Kante, and while in theory his defensive nous should have complemented the creative gifts of Cesc Fabregas, in practice the pair of them were too slow to play together.

Matic is appreciated by Premier League fans because he is an uncomplicated footballer whose game is easy to understand. He knows his limits and concentrates on the parts of the game that he does well. The parts of the game he doesn’t do well include anything requiring foot speed, and anything that happens in the opposing half. If you are looking for someone to sit in front of the defence and add security, Matic is your man.

There were also runs and touches that Matic could never have produced. Bakayoko is raw, but he plainly has a higher ceiling than Matic

The key to understanding why Conte was prepared to let Matic join Manchester United is that the Chelsea coach was looking for more. He is not one of those managers who has one preferred way of playing that seldom changes. Last season, he famously turned Chelsea’s season around by switching to a back three. Yesterday, against Tottenham, he found a creative solution to the problems posed by the suspensions of Cahill and Fabregas, moving David Luiz into midfield and using Willian off the striker.

A manager who wants to be tactically flexible needs players who are tactically flexible. They ought to be able to do more than one thing well. Chelsea have replaced Matic with such a player in Tiemoue Bakayoko, whose debut against Spurs included some silly mistakes that the more experienced Matic probably would not have made – notably the foul on Dele Alli with which he conceded the free-kick from which Tottenham scored their equaliser. But there were also runs and touches that Matic could never have produced. Bakayoko is raw, but he plainly has a higher ceiling than Matic, and Conte’s job as a coach is to help him to get there.

Conte’s ecstatic reaction to Alonso’s late winner at Wembley told you a lot. The Italian might not be at Chelsea this time next year; no manager lasts very long there. But as long as he is there he cares intensely about winning every match, and with such a demanding figure setting the tone, it’s hard to imagine the players slacking far off the pace.

1 Andy Farrell hands Billy Burns first Ireland start against Georgia
2 ‘God is dead’: The world’s front pages remember Diego Maradona
3 GAA Statistics: Can Cavan and Thomas Galligan beat Dublin with the long kickout?
4 Keith Duggan: Through the glories and the disgraces, we were all Maradona addicts
5 Rugby Stats: Blame game at lineout time is on the whole team
Real news has value SUBSCRIBE
Crossword Get access to over 6,000 interactive crosswords