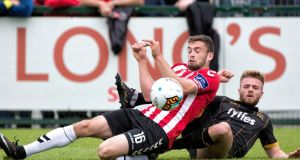 Dundalk produced yet another powerful performance when hitting Derry City with a second four-goal blast for the second time over the space of 10 days.

Having successfully negotiated their progression in the FAI Cup the previous weekend, Stephen Kenny’s men totally outplayed the ‘Candystripes’ at Maginn Park on Sunday, netting all four goals in a dominant first half showing.

Robbie Benson bagged a brace after he broke the deadlock in the 23rd minute with a delightful lob over Derry goalkeeper, Ger Doherty, having been played in by the lively John Mountney.

And within 90 seconds that lead was doubled when Patrick McEleney lofted a superb cross with the outside of his right boot, Dave McMillan meeting it to direct the ball across the body of Doherty and give him no chance.

Dundalk were relentless in their efforts to push forward in search of further goals and that policy was rewarded in the 33rd minute.

Michael Duffy tested Doherty with a shot from outside the area and while the Derry ‘keeper managed to parry the effort, Benson was the first to react and lash the loose ball home for his second and Derry’s third.

Dundalk made it 4-0 in the 41st minute, ensuring there would be no way back for their frustrated hosts.

Michael Duffy worked the ball into the path of Dane Massey on the left and his powerful low drive was met on the full by Mountney who diverted it firmly into the net with his first touch.

Dundalk ‘keeper, Gary Rogers, made a comfortable save from Ronan Curtis in the 43rd minute which represented the home side’s first serious effort on goal.

Nathan Boyle, Aaron McEneff and Aaron Barry all failed to trouble Rogers with efforts in the second half, Dundalk content with their day’s work reducing Cork City’s lead on the summit to 14 points with just seven games remaining.

For Derry, the pressure to secure a place in the Europa League next season continues as Shamrock Rovers move to within two points of them following this defeat.