The magical power of airplanes strikes again with O’Neill

Seanie Maguire, like Brian Lenihan and others, gets his Ireland call-up after transfer 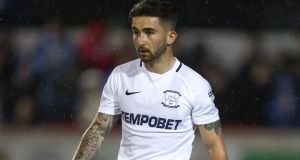 The first time I heard the “magical power of airplanes” gag, in relation to a player called into an Ireland squad I laughed out loud.

It was October 2014, Brian Lenihan was the player in question and he had recently moved from Cork City to Hull but had yet to make a first team appearance for the English club when Martin O’Neill initially included him in a squad for games against Gibraltar and Germany.

Amid all the talk about Seanie Maguire this week, though, it’s worth remembering that Lenihan wasn’t kept around the senior squad for long and hasn’t really been in serious contention for a call-up since, with injuries contributing to a lack of first team opportunities at club level.

Three years on, he is on a 12-month deal with the now Championship outfit, and has been an unused substitute in their opening two league games of this campaign. In a pre-season interview he admitted that he now needs “a little bit of luck” to establish himself there. There was no mention of Ireland in the piece.

Back in 2014, O’Neill acknowledged that he had barely seen the right back play but was short of options in the position and wanted to have a look at Lenihan about whom he had heard good things.

The joke was funny but actually was not such an unreasonable position for the manager to take.

It was cracked quite a few times in relation to Maguire this week, too, although O’Neill’s position again seemed reasonable enough. Maguire has barely touched down at Deepdale but there are a couple of weeks to go before the Ireland squad assembles so he may have had more of an opportunity to show how he is settling into the Championship by the start of next month.

The Ireland manager acknowledged on Monday, though, that the naming of such large preliminary squads allows him the freedom to give a little recognition to players he feels are moving up his pecking order and bringing more than he needs in for training allows him to gauge their progress at close hand.

As regards his position on the League of Ireland, he has a point when he suggests he has done more to involve players from it than his recent predecessors but it is telling that in relation to Maguire he mentioned the striker’s performances in only two games really, both against Dundalk.

Europe provided Stephen Kenny’s players with an opportunity to prove they could cope with life at a higher level and now, it seems, for the Ireland manager at least, they provide a measure of Cork City players’ ability to do the same. The sense is that he regards the rest as having some catching up to do and the league tables tend to back that position up.

He effectively acknowledged, in any case, that he is unsure at this stage as to where exactly Maguire is but it is clear, even as he moves to recruit Scott Hogan, that he would like to see the 23-year-old prove to be a viable option, Still, he seemed to be saying, the striker’s more enthusiastic advocates might be getting just a little ahead of themselves with talk of an imminent World Cup debut.

Certainly he must be hoping that the likes of Maguire, Daryl Horgan and Andy Boyle can establish themselves as serious contenders to start Ireland games over time because beefing up the FAI’s genealogy department looks to be the next best hope with the league here starting to produce more players that go on to represent the country at senior international level.

A fair bit was made of the number who started out with clubs when the squad was in France last year and the FAI’s restructuring of the underage development leagues should help. But those changes will take quite a while to produce significant results during which time, it seems, other associations are making progress with many of them investing huge sums.

Last weekend’s first round of Premier League games provided the latest, rather bleak snapshot of the current situation. There are essentially 18 senior players at the 20 clubs who might be considered eligible to represent the Republic of Ireland. Two - Damian Delaney and Stephen Ireland - are highly unlikely ever to wear the green shirt again while another, Tommie Hoban, seems pretty unlikely ever to wear the Watford one with a lot of talk about a move to QPR once he overcomes an injury.

Of the remaining 15, just six were born and “developed” in the 26 counties with four of those, plus James McClean, having spent time at League of Ireland outfits. Of the rest, seven are English born and one Scottish, which is fine as long as players like Jon Walters, Harry Arter and James McCarthy continue to declare for Ireland.

It is scarcely the basis on which anyone would, ideally, want to build for the future, though.

Hogan’s arrival on the scene seems to underline the point. O’Neill was pretty measured with regard to the player’s apparent procrastination over his international future last season when his immediate career prospects might have seemed a little brighter. If the reason for the delay was genuinely a desire to get his club career moving forward again after so many injuries then that seems reasonable enough but how much he can contribute - or even the extent to which his heart is in it - remains to be seen.

It took Walters, who had played for Ireland at under-21 level and who has regularly talked about his emotional commitment to the country, getting a move to the Premier league in 2010 before Giovanni Trapattoni decided to hand him a senior call-up. His form for Ipswich in the Championship the previous season would, one suspects, have been more than enough now.

O’Neill’s options may not be quite what the Italian’s were but fans of the league here should be careful what they wish for because while it may (must) represent the future, it has some ground yet to cover before it can feature more prominently in the national team’s present.