Australian international scores in second half against blunt Newcastle side 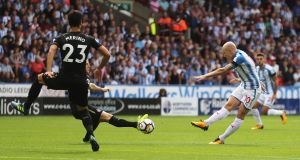 Huddersfield remain in dreamland after their first top-flight home game in 45 years produced a second deserved victory. The Terriers are now up there with Manchester United with two wins from two games, and if they are not quite hurtling down the motorway at the same speed as José Mourinho’s side, six points and two clean sheets is an early return few in West Yorkshire will have been expecting.

Many in the north east, on the other hand, will have been unsurprised at Newcastle’s second defeat of the season. The visitors were 3-1 winners here last season, when both sides were in the Championship, but never produced enough going forward to suggest a repeat might be on the cards. Even when they went behind their commitment to attack was questionable, and unless Rafa Benítez can liven things up with a few quick signings this could be another long season on Tyneside.

The pattern of the game was established fairly early on with Newcastle content to soak up the home side’s pressure and wait for occasional chances on the break. Huddersfield did most of the pressing and passing without creating a clear opening in the first half, whereas on the rare occasions their opponents got forward they managed to look slightly more dangerous.

Matt Ritchie cut inside from the left to bring the first save of the game from Jonas Lossl, and Christian Atsu was a threat whenever he found space on the right. Newcastle saw a couple of half-hearted penalty appeals turned down in the first half, one for a possible handball from Cris Lowe, the other when Dwight Gayle was dispossessed quite fairly by Christopher Schindler, while it took Huddersfield the whole 45 minutes to stretch the visitors’ defence.

When they did, Chancel Mbemba got back quickly to snuff out a pass from Elias Kachunga that was in danger of setting Steve Mounie free. The Town striker did not enjoy anything like the freedom he found on opening day at Crystal Palace, with Newcastle defending capably and refusing to allow any space behind their back line.

All that changed early in the second half when the Terriers came up with the goal the game and the occasion badly needed. Australian international Aaron Mooy, who had been influential in the first but mostly from deep positions, decided to get further forward and made the breakthrough on his own. Exchanging passes with Kachunga on the left he moved into the area to take the return and beat Rob Elliot with a perfectly placed shot that curled inside the right hand upright.

Newcastle had to come out and play after that, and Benítez sent on Joselu in place of Gayle, only to see his new striker booked for following through on Lossl. The forward was perfectly entitled to pressurise the goalkeeper when he attempted to clear a back pass from Kachunga but not to leave a foot in when Lossl reached the ball first.

The former Stoke player did slightly better in forcing a save from Lossl moments later when Atsu set up a shooting opportunity, though there was no real force behind Joselu’s shot and the goalkeeper found it easy to palm away.

Huddersfield played out the rest of the game as if they were enjoying it, while Newcastle seemed oddly resigned to defeat. Their only real chance of salvaging a point came 10 minutes from the end when substitute Jacob Murphy found himself in an advanced position, but a good recovery tackle from Lowe cleared the danger before the Newcastle player could manage a shot.