Leeds apologise to Derby and remind Bielsa of ‘integrity’ 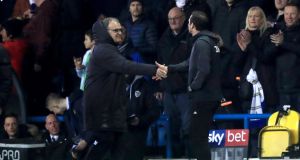 Leeds have apologised to Derby for spying on their training and will remind head coach Marcelo Bielsa of his responsibilities.

The build-up to Friday night’s 2-0 home win over Derby was dominated by claims from the Rams that a man was caught outside their training ground on Thursday.

Derbyshire Police were forced to intervene and it transpired the individual was an employee of Leeds, who was watching a training session.

Bielsa spoke to Derby boss Frank Lampard over the phone to accept full responsibility and was open about the incident when speaking to the media at Elland Road on Friday evening.

The former Argentina and Chile coach insisted it was not his intention to gain an advantage in a lengthy explanation that saw him admit it is something he has done for a number of years.

On Saturday morning, Leeds issued a statement, which read: “Following comments made by Marcelo Bielsa yesterday the club will look to work with our head coach and his staff to remind them of the integrity and honesty which are the foundations that Leeds United is built on.

“Our owner Andrea Radrizzani has met with Derby County’s owner Mel Morris to formally apologise for Marcelo’s actions. We will make no further comment on this matter.”

The Football Association is investigating, but, following Friday night’s win, which saw his side move five points clear at the top of the table, Bielsa refused to rule out continuing to employ the same ‘spy’ tactics.

“I’m not trying to justify anything,” he said. “I’ve just explained why I feel I’m not a person who cheats and why I accept any reaction this behaviour creates.

“Things are as English football says. I have to respect the habits and traditions of this country.

“This episode affects me. Of course the win is important. The only thing I’m going to apologise for is to have contaminated a football game with this subject.

“If I was a child, I would say I won’t do it again, but I wouldn’t feel right responding like this and would lose credibility.

“I won’t say that I won’t do it again. It’s a childish position to answer like that.”

While Lampard had joked the three points should be reversed when addressing the media after the match, he went on to suggest the FA needed to take firm action.

“It’s not for me to say what happens,” the former Chelsea and England midfielder said. “I believe there’s not an absolute clear-cut rule about it.

“But we can’t open the door to this thing happening every week. What kind of farce would that be? Everyone sending undercover people, drones etc into training. It would be farcical.

“Something has to be done. I don’t know what it is, it’s not my decision.”

Lampard felt Bielsa had acted against the spirit of the game and insisted he would rather quit coaching than employ the same tactics.

“Cheating is a big word,” he added. “If you talk about details and gaining advantages, great and good managers do that.

“I’d rather not coach than send people undercover on their hands and knees with pliers and bolt cutters to go and look at the opposition because I respect the opposition.”