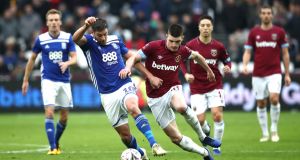 Declan Rice has said he will make a decisio over his international future ‘soon’. Photograph: Julian Finney/Getty

West Ham midfielder Declan Rice is nearing a decision over his international future.

Rice, who turns 20 next Monday, has become a mainstay in Manuel Pellegrini’s side this season, and recently signed a new contract tying him to the London Stadium until 2024.

But while Rice’s club future is now clear, he is yet to confirm whether he will represent the Republic of Ireland or England at international level.

However, speaking to the London Standard, he has suggested a decision is now imminent. He said: “With regard to my international future, myself, my dad and my brother [Connor] have talked with Ireland coach Mick McCarthy and I’ve also spoken to Gareth Southgate.

“They’ve both said that whenever I’m ready, it’s up to me to make a decision. There was so much going on earlier in the season but now most of that has been sorted, so I will make a decision soon.”

Despite regular speculation over his future Rice has excelled in his 22 appearances for the Hammers this season, and says he hasn't been distracted by what has happened off the pitch.

“I’ve always been good at handling stuff mentally. I knew the new contract would happen. It was a long wait but I was aware that, if I started thinking about it too much, it would distract me. We were playing vital games and you just can’t let stuff like that distract you

“I knew by playing in all the games and doing well that something had to give and the contract would come — and I was delighted to sign it. I saw other clubs mentioned but it would have been disrespectful of me to have considered leaving West Ham and my teammates. My intentions were always to stay here and I feel this is the best place for me.”