Leeds and Bielsa unflusterd by spygate as Derby are swept aside 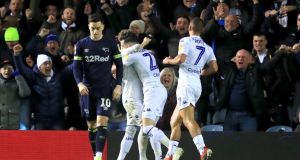 For a man who had just been un-masked as a spy master running a series of agents embroiled in the murky, clandestine world of “dark-ops”, Marcelo Bielsa cut a remarkably unconcerned technical area figure.

The former Argentina manager sees little wrong with snooping on opponents and this combination of coaching and reconnaissance seems unbeatable. Bielsa has not only replaced beauty with ugliness on the field but led Leeds to the top of the Championship where they stand five points clear of second-placed Norwich and 11 ahead of sixth placed Derby County.

To say Frank Lampard’s side were well beaten would be an understatement as Bielsa’s players erased memories of a midwinter blip featuring two successive League defeats.

This will for ever be a fixture haunted by memories of the bitter rivalry between Don Revie and Brian Clough and it kicked off on a suitably acrimonious note.

Earlier in the day Derby announced that police had been called to their training ground on Thursday following reports of a man equipped with binoculars, wire cutters and camouflage clothing lurking suspiciously just outside its boundaries.

Bielsa admitted he had sent a member of his backroom staff to spy on Lampard’s preparations, revealing it was a ploy common in South America and something he had been deploying since his days in charge of Argentina.

Derby’s unimpressed manager did not seem mollified. Indeed Lampard indicated he believed it was no coincidence that, shortly before his side lost 4-1 to Leeds at home earlier in the season, a man was spotted lurking in the bushes beside their training complex.

Maybe David Peace, an author well versed in Elland Road’s history of dirty tricks, should consider writing an epilogue with a modern day twist to the Damned United?

If MI6 are unlikely to be poaching the “agent” Bielsa dispatched to Derby anytime soon, it rather begs the question as to how many other Championship rivals have been spied on and failed to notice since August? The impending Football Association investigation promises to be interesting.

Following a rather awkward handshake between the two managers, Lampard could have seen his side fall behind with the first minute. Indeed Derby seemed to have conceded a penalty following Andre Wisdom’s foul on Ezgjan Alioski but, although the referee pointed to the spot a linesman had already flagged – controversially – for an offside against Alioski.

It was, though, merely a stay of execution. When Jack Clarke swept beyond Craig Bryson and delivered a superb right-wing cross, Kemar Roofe was in the right place to lash a first-time volley beyond Scott Carson.

Lampard dug his hands deeper into his tracksuit pockets. His team seemed overwhelmed by the relentlessly high tempo of Leeds high pressing game.

Derby were failing to fathom out the home side’s highly fluid formation – 4-1-4-1 one minute and 3-3-3-1 the next – and positional rotation. Alioski, for instance, not only alternated between left-back and midfield but occasionally appeared at centre -forward.

Yet Leeds had not created many clear-cut chances. Moreover the goal – originating from a partially cleared Pablo Hernández penalty which Carson could only punch towards Clarke – had been preventable.

Unfortunately for Derby’s manager all that changed at the outset of the second half. Leeds doubled their advantage. Once again Clarke provoked panic on the right and, once again, Carson made less than perfect contact as he misread his looping cross. The goalkeeper’s weak punch travelled only as far as Alioski who played it back in for Jack Harrison to score with a close range tap-in.