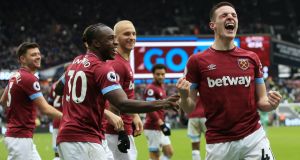 Declan Rice scored his first career goal to fire West Ham to a 1-0 win over Arsenal.

Rice continues to weigh up his international future, and it's unclear when he will make his decision over declaring for Ireland or England.

The 19-year-old midfielder struck early in the second half to condemn Arsenal, who left Mesut Ozil out of their squad, to a fifth defeat of the season.

Marko Arnautovic was in the West Ham side despite having his head turned by the Chinese, but in the end it was Rice who delivered.

The pre-match speculation centred around whether Arnautovic, the subject of a mega-money bid from the Chinese Super League, would feature for the Hammers.

In the end boss Manuel Pellegrini stuck by the Austrian, despite his brother and agent claiming this week that he wanted to leave.

But it was a player conspicuous by his absence on the Arsenal team sheet, Ozil, which raised eyebrows.

The club’s highest-paid player is fit having trained all week, but still could not even make the substitutes’ bench, the clearest indication yet that he is not part of manager Unai Emery’s long-term plans.

It seemed a match tailor-made for the German playmaker, with West Ham inviting Arsenal to attack at their leisure during the first half, making the snub all the more surprising.

Then Lacazette was played in by Alex Iwobi, but his close-range shot was straight at Lukasz Fabianski, the striker hooking the rebound over the crossbar.

But West Ham were having their moments, too, with Felipe Anderson sending a curler just off target and Samir Nasri playing a neat one-two with Arnautovic in the area before firing into the side-netting.

Nasri, making his Premier League debut for the Hammers against his former club, teed up Anderson 18 yards out, but the Brazilian drilled a low shot across goal and narrowly wide.

Shortly before the break Rice headed Anderson’s corner the wrong side of the far post, but he did not have to wait long to open his account.

Three minutes after the interval Anderson raided down the right and, when Granit Xhaka made a mess of clearing his cross, Nasri tapped the ball to Rice, who gleefully hooked it home.

Emery made a double substitution, sending on Aaron Ramsey and Lucas Torreira, in a bid to retrieve the situation.

But Aubameyang sent an angled drive high and wide, Iwobi’s shot beat Fabianski and the far post and an offside flag denied Laurent Koscielny a stoppage-time equaliser to cap a frustrating afternoon for the visitors.