Recovering Paul Pogba to join up with United squad in Dubai 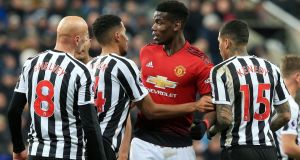 Paul Pogba has failed to make Manchester United’s flight to Dubai for a week of warm-weather training due to a leg injury, though the club expect him to join up soon. The Frenchman suffered the problem in a second-half challenge by Newcastle United’s Jonjo Shelvey in Wednesday’s 2-0 win at St James’ Park.

This caused Pogba to miss Saturday’s FA Cup third round win over Reading at Old Trafford. A club statement said: “Paul Pogba has not completely recovered from the knock he sustained against Newcastle and stayed back for treatment, but he will join his Manchester United team-mates in Dubai soon in preparation for the Tottenham game. The squad travelled to Dubai after Saturday’s 2-0 FA Cup win over Reading at Old Trafford for a training camp ahead of the Reds’ next Premier League outing, against Tottenham Hotspur at Wembley Stadium next Sunday, 13 January.”

Ole Gunnar Solskjær, the interim manager, is aiming for a sixth win for his opening six games in charge against Spurs.

Meanwhile, Romelu Lukaku believes Manchester United are “back to ourselves” after a difficult few months. Jose Mourinho’s sacking has rebooted things at Old Trafford, where Solskjaer could scarcely have wished for a better start to life as caretaker manager.

The Norwegian has overseen five wins from as many matches, emulating the great Matt Busby in making that 100 per cent start to life in the United hot seat. Saturday’s 2-0 win against Reading in the FA Cup was the most unconvincing of those triumphs to date, but Lukaku believes Solskjaer has got the team back to where it should be.

Put to the striker that things are going well after scoring in a third-successive match, he said: “Yeah, not only for me but for the rest of the team. I think we are back to ourselves and it’s good to see the players enjoy (it) and winning games, which is the most important thing. We are Manchester United and we try to go out there and win every game.”

Lukaku missed the first two matches of Solskjaer’s reign due to a private matter but has found the net in every appearance since returning. There is no doubt this has been a tough campaign for the 25-year-old, but he is clearly enjoying life under the former United striker.

“He helps us a lot,” Lukaku said of Solskjaer. “In training when we do the finishing, he helps us a lot — how to strike the ball, how to move away from the ball. And the way how he wants us to play really benefits me because he wants me to be in a position where I want to be, so he understands what type of striker you are and he just plays to your strengths.”

A lot is expected of Lukaku as the most expensive striker in United’s history, but he is not guaranteed a starting place under Solskjaer. Marcus Rashford has shone brightest since the change in management, while the other attacking options have shown a renewed spark.

“Yeah, you have to (perform),” Lukaku told MUTV. “Look at the teams that they had back in the day and it was the same thing then. “For me, I just take it one day at a time, one game at a time and I try to help the team by scoring goals.”

United’s next match is their toughest to date, but before heading to Tottenham next Sunday comes a warm-weather camp in Dubai. “You know what, it’s going to be good for us as a team because we are performing really well but now going away it’s going us to help us become an even tighter group,” Lukaku added.

“We do a lot of stuff together off the pitch and now we are going to be together for a week and hopefully it can help make us an even tighter unit.”

While United look to rack up a sixth-straight win in all competitions, struggling Championship side Reading will hope their positive performance at Old Trafford can inspire the end to a rotten 11-match winless streak.

Royals full-back Andy Yiadom said: “We came out here and we just wanted to express ourselves and do what the manager’s been telling us to do.

“Despite the result, I think we went out there and we did that.

“You could tell everyone wanted the ball and wanted to express themselves and show what they could do.” Guardian

Antonio Rüdiger says racism has won after boos at Spurs 22:30
Eddie Jones’s comments have already provided Irish team-talk for 2021 22:00
England held all the aces in defining battle of the breakdown 21:00
TV View: Sunday Bloody Sunday . . . Not Bono’s fault but Boy, that was Bad 19:59
Neil Lennon says Celtic still ‘a million miles’ from title after comeback win 19:31