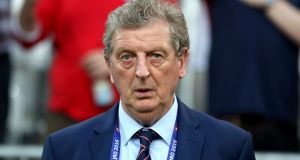 Roy Hodgson: The 70-year-old will be charged with steering Crystal Palace to safety in the Premier League following a poor start to the season. Photograph: Owen Humphreys/PA

Roy Hodgson is to return to Premier League management with Crystal Palace a little over a year since England’s humiliating exit from Euro 2016 at the hands of Iceland, after the south London club reacted ruthlessly to a poor start to the campaign by sacking Frank de Boer four games into a three-year contract.

De Boer’s 77-day stint is the briefest in terms of games played of any Premier League manager, with the breakdown in the Dutchman’s relationship with the club’s owners having effectively left him a dead man walking since the end of last month.

Hodgson is expected to sign a two-year contract, with a significant bonus payable if Palace retain their top-flight status, and will start his tenure at the club, through whose youth ranks he progressed as a player, against Southampton on Saturday.

He will inherit a side who are pointless and goalless in the division, with daunting games against Manchester United, Manchester City and Chelsea to come after Saturday, but who showed signs even in defeat at Burnley on Sunday that they were grasping De Boer’s demands.

The manager, too, had displayed a willingness to adapt in that match, reverting to a flat back four. As it is, and despite the chairman Steve Parish stressing the need “to stick together” en route back from Turf Moor, Palace felt compelled to act on Monday.

The major shareholders, David Blitzer and Josh Harris, had been in attendance in Lancashire and, after talks with Parish and the sporting director, Dougie Freedman, sanctioned the dismissal.

The writing had effectively been on the wall since the loss to Swansea at the end of last month, a defeat which exposed the breakdown of the relationship between manager and ownership.

The board felt De Boer had veered away from his summer pledge to instigate “evolution, not revolution” with some of his tactical decisions deemed naive and inappropriate for the squad he had inherited.

The owners were dismayed, too, by an apparent lack of clarity to training and questioned team selection, with the manager, critically, struggling to provide a clear plan as to how to arrest the team’s slump in a meeting held with Parish and Freedman on Monday August 28th in the aftermath of the home defeat by Swansea.

De Boer had his own complaints, from a restricted pre-season schedule which took the side to Hong Kong when the squad might have benefited more from games in his favoured 3-4-3 system back home, to a lack of leeway in the transfer market.

Jairo Riedewald, secured from Ajax, was the only permanent signing made before deadline day. The protracted pursuit of Mamadou Sakho, who arrived for €28m at the end of the month and completed 45 minutes for the under-23s on Monday, was driven more by Parish than the management following the Frenchman’s success at Selhurst Park last season.

As it is, a manager whom Palace had hoped would provide a long-term progression ended up being ushered out of the club in only 11 weeks, with Hodgson, at 70, charged with salvaging the season.

The Croydon-born manager achieved notable success on that front at Fulham and West Bromwich Albion, spells which sandwiched a disappointing and brief stay at Liverpool, before his four-year spell with England. That encompassed three tournaments but ended with the ignominy of that loss to Iceland at Nice’s Allianz Riviera.

Hodgson, who turned down a chance to appear in last year’s Strictly Come Dancing after he left the England set-up, had indicated a desire to return to top-level club management and made clear his pride at his achievements with the national team in an interview given to The Big Issue over the summer.

“Probably the four years, especially the last two years after the World Cup, fashioning a team from a very young group of players, many of whom weren’t even in their club side... we were playing very, very well,” he said. “I am very, very proud of that achievement.

“I think it is probably the best work, in many ways, that I did or have done so far. So there was never any doubt I would collapse in any way or self-doubt. In fact, if anything, I think the experience it makes you stronger. In football however well you think you are doing, however well your life is going, there is always a mugger there lurking in the shadows, to bash you over the head when you least expect it.”

The finer details of Hodgson’s contract were being settled on Monday night. He is expected to be joined by his number two with England, Ray Lewington, with De Boer’s coaches, Orlando Trustfull and Alessandro Schoenmaker, having departed. Sammy Lee, who joined the staff with Sam Allardyce last December, may also leave. Guardian Service