If Fellaini is the answer, Mourinho should rethink the question 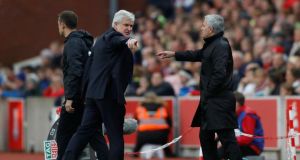 A game for Marouane Fellaini: that was José Mourinho’s assessment after Manchester United dropped their first points of the season. The richest club in the world had the attacking might of Romelu Lukaku, Anthony Martial, Juan Mata, Henrikh Mkhitaryan, Paul Pogba and Marcus Rashford at their disposal.

Nemanja Matic, the imposing €44 million signing from Chelsea, offered brawn in midfield and there was no space on the bench for the new €34 million centre-back Victor Lindelöf. Yet Mourinho pined for his sharp-elbowed Belgian nuisance, whose absence with a calf injury apparently left a team containing nine players taller than 6ft vulnerable to a classic Stoke City aerial bombardment.

Mark Hughes, who was more than happy to continue his touchline contretemps with Mourinho, bristled at the perceived dig at Stoke’s supposed long-ball tactics. His team might possess physical power but they also have flair players and no longer rely on set-pieces or Rory Delap’s long throws.

“That’s just an easy swipe at us, really,” the Stoke manager said. “You could argue United played more long balls, and why wouldn’t they, because they’ve got power and pace and, if they can get those players ahead of the ball with good accuracy, they’ve got pace and power to burn.

“I don’t know what the stats are but I’d argue that in general play they played more long balls than we did, because they’ve got that threat and that’s what they try to exploit. I think it’s a bit lazy of people to keep on reverting to that ‘Stoke are a physical team’ thing.”

Mourinho incorrectly and ungenerously claimed that only one team wanted to win. The truth is that United did not do enough to leave the Bet365 Stadium with the victory that would have taken them two points clear of Manchester City at the top of the table. Stoke, competitive and creative, were good value for a point. The sense lingered that Mourinho wanted to divert attention away from United’s flaws after they struggled to pass their first big test.

United had momentum after beating West Ham, Swansea City and Leicester City without conceding a goal but they drifted out of the title race after a similarly dominant start last season. They finished sixth after drawing 15 times and qualified for the Champions League only by winning the Europa League. A disappointing league campaign was largely attributed to a shortage of ruthlessness during a transitional period. Fine players spurned a lot of chances, a weakness that flared on Saturday when Lukaku missed a late chance to score his second goal and make it 3-2.

Yet it is too simplistic to conclude that better finishing alone will make United champions for the first time since 2013. In attack they boast enviable class and depth. They have skill, speed and craft. Rashford scored again, albeit fortunately, and Mkhitaryan created Lukaku’s goal with a beautifully disguised through-ball. But this is still a team striving for a smoother offensive rhythm. Too often play was slow or predictable and they did not create enough chances. There was not enough of a pattern, with players regularly not on the same wavelength.

United have so many gifted forwards that there will always be individual flashes that lead to goals, but stubborn opponents such as Stoke are tough to wear down and that lack of refinement could hold them back.

A game for Fellaini, though – what does that mean? That United, who were able to bring Martial, Mata and Jesse Lingard off the bench when it was 2-2, would have had a better chance of winning if they had spent the dying moments hurling the ball into the mixer for a big man to attack? Penalty box chaos: is this really the way forward for a team of United’s ambitions?

Of course Mourinho spoke about Fellaini in defensive terms. Stoke’s equaliser came when Eric Maxim Choupo-Moting, who gave the hosts the lead in the first half when he beat Eric Bailly to Mame Biram Diouf’s cross, eluded Phil Jones and headed the excellent Xherdan Shaqiri’s corner past David De Gea.

But the argument that Fellaini’s height would have helped was disingenuous. United are not a small side, especially after Matic’s arrival. They were ready for a battle, with Mourinho bolstering his midfield by dropping the creative Mata for the 6ft Ander Herrera. They conceded because of slack defending. Bailly was dozing for Choupo-Moting’s first goal and Jones was left in an embarrassed heap for the second.

United return to the Champions League when they host FC Basel tomorrow night. They are taking nothing for granted against the Swiss champions. “We have to know where we come from,” Herrera said. “We have come from the Europa League. We were sixth in the Premier League. ”

They are a developing team. But wherever they are going should be possible to reach without Fellaini.