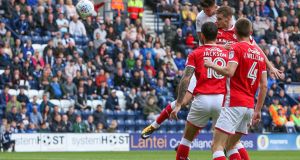 Sean Maguire opened his Preston North End account against Barnsley on Saturday, as the visitors left Deepdale with a point.

Maguire, a summer signing from Cork City, gave Alex Neil’s side the lead with a 24th minute header.

Maguire played the full 90 minutes as Preston pushed for a winner, but they had to settle for a point which leaves them in 10th place in the Championship.

Elsewhere James McClean was an unused substitute for West Brom as they were beaten 3-1 away to Brighton & Hove Albion.

Shane Duffy had the ball in the back of the net for Brighton - but saw his effort ruled out for offside.

Wes Hoolahan was also consigned to the bench as Norwich City edged past Birmigham City at Carrow Road, thanks to Nélson Oliveira’s fifth minute stroke.

Glenn Whelan was dropped for Ireland’s 1-0 defeat to Serbia last Tuesday but started for Aston Villa on Tuesday as they were held to a goalless draw by Brentford at Villa Park - with Conor Hourihane also playing the full 90 minutes.

And in League One Richie Towell scored a 89th winner for Rotherham, as the Millers beat Bury 3-2.