Jose Mourinho keen to get United back among European elite 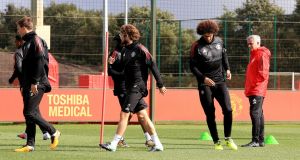 Manchester United manager Jose Mourinho looks on during a training session ahead of the Champions League game against Basle at Old Trafford on Tuesday. Photograph: Peter Byrne/PA Wire

Europa League glory brought a much-needed return to European football’s top table, with last season just the second time in 22 years that the Red Devils had missed out.

Mourinho believes the Champions League is the “natural habitat” of the three-time European champions, who kick-off Group A against Basle at Old Trafford on Tuesday evening.

It will be United’s first match in the competition for 644 days and appears a great opportunity to hit the ground running, although the Portuguese knows quite a challenge lies in wait in this competition.

“I think in the Champions League there are four or five teams with an incredible level of quality, of experience, of know-how and that’s what makes the difference.

“Apart from that, there are many teams in the Champions League that are very similar to teams in the Europa League.

“In fact, Feyenoord and Anderlecht, who we played them last year in the Europa League, were champions in their countries and now they are playing in the Champions League, so there are many teams with similar qualities.

While the likes of Real Madrid, Barcelona, Bayern Munich and Juventus are sure to make life hard, few expect United to slip up in a group containing Basle, CSKA Moscow and Benfica.

Their impressive start to the Premier League has only furthered that belief, with Mourinho speaking of the confidence coursing through his squad ahead of Tuesday’s Group A opener.

The Portuguese is also boosted by the likely return of Marouane Fellaini – a divisive figure whose midfield presence was missed in Saturday’s 2-2 draw at Stoke.

The re-occurrence of a calf complaint sustained on international duty was behind his absence and appeared to grate on Mourinho as Fellaini played Belgium’s match against Greece despite the issue rearing its head beforehand.

The 29-year-old missed training on Sunday but returned to the group on Monday, when Marcos Rojo, Luke Shaw and Ashley Young were among others in action on their return from long-term injuries.

“He’s a very important player for me – much more important than what you can imagine,” Mourinho said. “I feel weaker without Fellaini in my squad.

Mourinho was able to confirm that David De Gea will start ahead of Sergio Romero in goal, while Chris Smalling and Victor Lindelof will come in for the suspended pair of Phil Jones and Eric Bailly.

“It is not an opportunity, it is just normal,” Mourinho said of his centre back changes.

“I don’t think Bailly and Jones are better than them. I think they are the same level, they are just different players.

“Even if Jones and Bailly were not suspended, probably I would still play Lindelof and Smalling tomorrow because for me they are the same level. It is just a question of option.

“We were playing one match per week, I never felt reasons to make changes, but I play them tomorrow and, for me, it is exactly the same as Bailly and Jones.”

It feels a particularly important night for Lindelof. The Sweden defender, a big-money signing from Benfica, has not featured since a shaky display in the Super Cup defeat to Real Madrid and will make his first Old Trafford start against Basle.

“I think it is easier for him to play Champions League,” Mourinho explained. “It is more comparable to the Portuguese style of football.

“It is more differences in relation to the Premier League, so no need to adapt to Champions League.