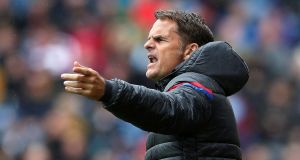 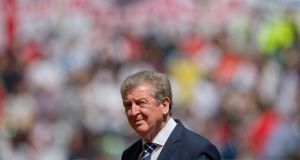 Frank de Boer has been sacked as Crystal Palace manager 10 weeks after the Dutchman was appointed to replace Sam Allardyce at Selhurst Park.

De Boer suffered four defeats from his four Premier League matches against Huddersfield, Liverpool, Swansea and Burnley, in which Palace failed to score a goal. They are the first team in 93 years to have begun a top-flight season in such a fashion.

Palace have made attempts to persuade Sam Allardyce to come back but the former England manager has been resistant, making Roy Hodgson the likeliest candidate to take over.

Palace are aware of Hodgson’s enthusiasm to come back to the club where he was a youth-team player. Hodgson’s erstwhile No2 Ray Lewington was on Palace coaching staff for three years in the mid-1990s and would presumably accompany the 70-year-old were he to be appointed.

De Boer’s reign is the shortest of the Premier League era. Les Reed had seven games in charge of Charlton in 2006.

Palace said in a statement: “Crystal Palace Football Club have this morning parted company with Frank de Boer. We would like to thank Frank for his dedication and hard work during his time at the club. A new manager will be appointed in due course and we wish Frank the very best of luck for the future.”