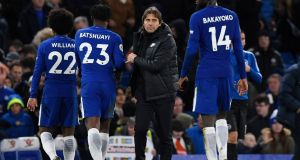 Deep relaxation may not be a trait readily associated with the usually frenetic Antonio Conte, but the Chelsea manager paused for breath in the middle of this hectic winter schedule to confess he likes to read up on yoga and seeks moments of respite with stretching exercises and a few minutes of mindfulness every now and then at their Cobham training ground.

Conte, an expert in hyperactive exertions on the touchline during games, does not appear to be the meditating type. But he admits that a relentless series of matchdays can leave a manager shattered. “When you live the game in this way, when you finish you are a bit exhausted,” he says. “Maybe in the future when I become older then I start to be more calm and to try to sit during the game.” It is hard to imagine, but the fact he is even considering it is revealing.

The impact of this busy period on players, performances and the product of English football is an important conversation that should not be crushed by the power of television money. Managers, Conte adds, are not impervious by any means. He has stopped training during the week to conserve some of the intense energy he will summon when the whistle blows to signal deep competition where he feels every kick from his technical area. “I think I am well trained for this but to play every three days is a big effort not only for my players but also for me.”

He is grateful that the club have a trainer as part of the support staff who offers strategies to de-stress. He takes up the opportunity for moments of respite by stretching and engaging in relaxation techniques. “This is good, personally I like it and am very interested in yoga. I like to read books about these topics.”

The man along the touchline from him on Wednesday tonight, Arsenal’s Arsène Wenger, could tell Conte a few things about how it feels to spend some time during games sitting down, maybe share a few ideas about zen that he learned during his time in Japan. Of course there will be no time for such stuff in the thick of a London derby at the Emirates Stadium that kicks off a mini-series between these two clubs, with Carabao Cup semi-finals round the corner after this midweek Premier League meeting.

Conte definitely notices a difference this season compared to last in that Chelsea are involved in four competitions – a substantial increase in their workload from a year ago. “Last season we played only two because in the Carabao Cup [it was the EFL Cup] we were out very soon in the second round [actually after three games]. I think that you solve a lot of problems to play only two competitions and to rotate your players in the right way. This season you have to face all four and you continue to go through. Now we are in the semi-final and we have to start the FA Cup on Saturday and play Champions League, you must be prepared with many players to face other competitions.”

Conte is quietly satisfied with Chelsea’s health going into Wednesday night’s game, with a fixture list that affords them more rest than some and a squad feeling relatively strong with only a couple of injured players, who are close to returns. Arsenal’s lot is not quite so generous as the treatment room is busy with a string of defenders struggling, form is unreliable and the transfer window looks precarious with three major players running down contracts.

While Wenger is already weary of questions about what will happen with Alexis Sánchez, Mesut Özil and Jack Wilshere, Conte has his own method for ensuring he will not get too wound up by the window. Constantly on the phone? “No,” he says with a chuckle. “I change the number.”

In all seriousness, once he has given Chelsea his opinions on where the squad could do with change or refinement, Conte leaves transfer matters to the club. The names of Arturo Vidal and Sánchez were thrown his way, prompting him to reply: “We must stay calm. I don’t like to speak about other players of other teams but you are talking about two big and strong players, top players for their roles.”

There is unlikely to be a new signing without somebody leaving to create room in the squad, and Conte was clear that anyone agitating for a move to ensure a World Cup spot (possibly David Luiz and Michy Batshuayi) could create a situation that needs resolution. “I was a player,” he explains. “I will understand if someone is worried about the World Cup.

“It’s very important to keep players very happy to stay here to work with us and I think this must be our priority. I prefer that than to have players that are unhappy because when you are unhappy you transfer this to the other players, to me, to my staff and I don’t like this. I’d like to avoid this situation.”