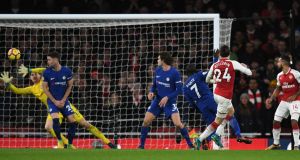 Hector Bellerin scores a late equaliser for Arsenal in the Premier League game against Chelsea at the Emirates Stadium. Photograph: Dylan Martinez/Reuters

Arsène Wenger strode purposefully towards the fourth official, Craig Pawson. The Arsenal manager was a long way from his technical area and there was steam coming out of his ears. His team were in the lead, thanks to Jack Wilshere’s goal, which, after all of the midfielder’s injury misery, was a beautiful moment for him.

But the referee, Anthony Taylor, had pointed to the penalty spot and all of Wenger’s conspiratorial pre-match fears had seemingly been realised. Wenger had railed against perceived poor officiating and Taylor always stood to be a central character. Wenger had clashed with him last January to earn himself a four-match touchline ban.

There was no injustice here. Hector Bellerín’s lunge at Eden Hazard inside the area was not just ill-advised, it was reckless. He caught Hazard’s foot; Hazard went down and, if the fall seemed a little exaggerated in real time, Taylor’s decision was vindicated with every replay.

Hazard beat Petr Cech from the spot and things looked bleak for Wenger and Arsenal when the Chelsea substitute, Davide Zappacosta, rinsed the inexperienced wing back, Ainsley Maitland-Niles, to cross for Marcos Alonso to touch home in front of the flat-footed Shkodran Mustafi.

Enter Bellerín, again. In stoppage-time. At the other end. After Alonso had only half-cleared with a header, Bellerín crashed a half-volley goalwards and it was still rising when it ripped into the net. There was still time for Arsenal’s back-line to fall apart for one last time following a long ball forward and Álvaro Morata had the chance to win it for Chelsea. He could not beat Cech and Zappacosta rattled the rebound against the crossbar.

The point did not do much for Arsenal’s top-four ambitions. There remains six points and daylight between them and fourth-placed Liverpool. But it was infinitely better than the alternative.

Chelsea had brought with them an imposing run of form – 32 points from an available 39 – even if, in the face of Manchester City’s majesty, it had rather flown under the radar. They had to fancy themselves to get chances against a callow Arsenal back line and they did. Only Morata knows how he did not give them an early lead with a gilt-edged one.

It followed the kind of defensive meltdown to give Wenger nightmares. Victor Moses had punted a hopeful ball forward which Calum Chambers ducked underneath and decided to leave. Bad move, especially when Mustafi, who was inside of him, wandered away. Suddenly Morata was in, one-on-one with Petr Cech. He opened up his body for the side-footed finish and botched it horribly.

Wenger had tweaked his starting formation, playing Alexis Sánchez as a left-sided striker, with Alexandre Lacazette on the right. The attacking partners often had plenty of distance between them. In midfield Mesut Özil – who had passed a late fitness test – and Wilshere were encouraged to press either side of Granit Xhaka.

Arsenal enjoyed a purple patch leading up to the midway point of the first half and they would have led were it not for the reflexes of Thibaut Courtois. Twice the home team worked clear shooting opportunities and twice the goalkeeper denied them.

On the first occasion Courtois was helped by both of his posts. Sánchez unloaded and he was ready to celebrate only for Courtois to tip the ball on to the inside of his right post. It ran across the line, kissed the inside of the other post and spun to safety.

The second chance was all about Lacazette and one of his trademark penalty-box spins, which threw his marker, Gary Cahill. Courtois shot out a long arm to repel his low shot.

There were thrills and spills – and a few laughs, with Maitland-Niles providing one of the latter when he clipped his own heel inside the Chelsea area on 16 minutes and went down. He was lucky to escape a yellow card. Moses also erred in darkly comic fashion with an errant pass inside. Lacazette could not capitalise.

Hazard played off Morata and he shimmered with menace while Cesc Fábregas twice teed up Tiemoué Bakayoko before the interval with sumptuous passes. From the first Bakayoko saw Cech tip over his shot. The midfielder did not read the second, which Fábregas had dropped over Rob Holding.

It was a mystery how the scoreline remained blank at half-time. Alonso lifted a free-kick over from the edge of the area; Özil shot past the far post and Fábregas, following N’Golo Kanté’s robbing of Özil and Hazard’s lay-off, curled high.

There were plenty of tired minds and limbs after the punishing Christmas and New Year programme, and it all felt a little off-the-cuff. Cohesive build-up play was lacking. Still the chances came and went through sheer force of will. The second half developed into an end-to-end slug-fest.

Fábregas was brilliant. When he was substituted, there were boos from the home crowd towards their former player but it was also noticeable that a number of Arsenal fans rose to applaud him. The Spaniard played in Hazard early in the second half and Cech did well to save his low shot for the far corner while, at the other end, Lacazette caught a break off Cahill and had only Courtois to beat. The goalkeeper stood tall to block.

Özil had gone close when Wilshere bludgeoned Arsenal into the lead, after Holding’s low pass had flicked off Morata and fallen for him. The left-footed first-time finish flew high into the near top corner of the net and it sparked delirium inside Wilshere and the home support.