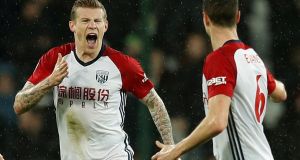 James McClean’s joy at ending his long goal drought at club level was cruelly short-lived. The Derryman revealed that he returned home from West Brom’s 2-1 defeat in London to discover that his house had been burgled.

“When you get home from a last min defeat and your house has been robbed . . . thieving b*****ds! Great night!” said the Republic of Ireland international in a post on Instagram, just hours after Andy Carroll’s late strike had deprived West Brom of a point despite McClean having given the visitors the lead a half-hour in with his first goal for the club in just over 50 appearances.

The 28-year-old later told the Derry Journal the intruders had “wrecked the place” and confirmed that amongst the items stolen was a £26,000 watch.

Shane Long, meanwhile, has said that he hopes his first goal for club or country since February 11th will lead to more over the coming week. The striker had played over 1,000 minutes of football for Southampton in the months since without finding the net, but finally ended the run in the 17th minute of Tuesday’s game at home to Crystal Palace – although his side also lost 2-1 in the end.

“I’m an experienced player,” he said. “It’s hard not to let it get on top of you when you’re not scoring, but I just kept plugging away. It’s nice to see it hit the back of the net. Frustrating it didn’t get us three points, but nice to get it off my back and hopefully I can kick on from here on in.”

Derry City boss Kenny Shiels has said that his son Dean, who spent the latter part of the 2016 season with Dundalk, is abused by supporters in Scotland “every week” for having an artificial eye, the result of a childhood accident.

“He played in the Edinburgh derby and got it there, he got it at St Mirren – he gets it every week,” the City boss told BBC Northern Ireland after a number of artificial eyes were thrown at the midfielder on Tuesday during Dunfermline’s defeat of Falkirk, who currently have two players suspended in relation to previous incidents of abuse relating to the Irishman.

Falkirk have apologised for what they described as the “abhorrent behaviour of a small number of individuals”, and promised to work to identify those responsible and take action against them.

City, meanwhile, have signed Under-19 Republic of Ireland international striker Ronan Hale on loan from Birmingham City. He joins his brother Rory at the club.

Norwich City, meanwhile, have confirmed that former Cabinteely and UCD midfielder Simon Power has signed an 18-month contract. The 19-year-old had been on trial at the Championship club for the past few weeks.