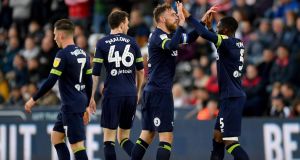 Derby drew 1-1 at Swansea as Frank Lampard’s side failed to get the win that would have all but booked their place in the Championship playoffs.

A first-half header from Republic of Ireland defender Richard Keogh looked like giving Derby a handsome advantage over seventh-placed Middlesbrough ahead of their final game at home to West Brom on Sunday.

But Wayne Routledge’s 66th-minute equaliser means Derby go into the last day of the regular season with a one-point lead over Boro while Bristol City, a point further back, also remain in the playoff equation.

In the end a draw was probably a fair result, with Derby the more polished outfit before the break and Swansea energised after it to protect an unbeaten home league record that stretches back to December.

But boss Lampard might rue the fact that Derby did not make their early edge count, especially as victory would have surely sewn up sixth place given their superior goal difference to Boro’s.

Both sides formed a guard of honour before kick-off for Alan Curtis, who is retiring from coaching at the end of the season after 40 years of service at Swansea.

Derby were briefly worried when the Swansea dangerman Daniel James tested Kelle Roos with a low shot at his near post.

But Derby soon established control and Tom Lawrence fired over before Bradley Johnson brought a fine point-blank save from Kristoffer Nordfeldt.

Swansea have struggled defending set-pieces all season and were punished again when Harry Wilson sent his corner to the far post.

Keogh took advantage of some lax marking to direct his header back across goal and in off the post.

James shot wide as Swansea stirred but Derby finished the half on top and twice came close to doubling their lead.

Cameron Carter-Vickers almost diverted the ball into his own net after some Mason Mount trickery, and Nordfeldt had to move his feet quickly to help Wilson’s audacious attempt over the crossbar.

Swansea made two changes at the break, as well as a tactical tweak as manager Graham Potter went with three at the back.

Declan John was immediately denied an equaliser by Roos’s outstretched foot and Jay Fulton, the other Swansea substitute, blazed over moments later.

Derby responded as Mount’s drive was deflected wide and Keogh headed over, but Swansea pressure was growing and the equaliser arrived when Oli McBurnie rose splendidly from a corner.

The Scot’s header was pushed on to a post by Roos, but the veteran Routledge was on hand to slide home his second goal in three games and boost his hopes of landing a new contract.

Keogh was injured in that incident to possibly put his place in the final game in jeopardy, but Derby kept their destiny firmly in their own hands.