Jan Vertonghen to see neurologist on Thursday after clash of heads 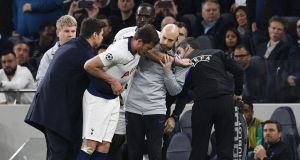 Jan Vertonghen is to see a neurologist on Thursday after suffering a worrying head injury during Tottenham’s Champions League defeat by Ajax.

The 32-year-old Belgium international had to be helped from the pitch during Tuesday evening’s 1-0 semi-final, first-leg defeat after initially being allowed to play on following lengthy treatment.

Spurs insisted on Wednesday evening that Vertonghen had not lost consciousness after colliding with team-mate Toby Alderweireld as the pair challenged for a high ball, and while they confirmed he had suffered no ill-effects in the 24 hours since, he is to be assessed by a specialist.

A statement on the club’s official website said: “Jan Vertonghen has undergone further assessment today after sustaining a head injury in last night’s Champions League semi-final first leg against Ajax. He also suffered a small cut to his nose that was bleeding heavily.

“The Belgium defender was assessed on the pitch yesterday immediately after the incident with our medical team strictly following Football Association concussion guidelines.

“Following testing he was judged to be alert and answered all questions correctly and lucidly, deeming him fit to return to the field of play.

“All available video footage was relayed to our on-pitch medical team and they were able to confirm that he had suffered no loss of consciousness.

“Jan was immediately withdrawn as a result of the player informing medical staff that symptoms were developing suddenly and that he no longer felt stable standing up.

“Tests today have been clear and testing will continue for the next few days. Additionally, as is standard club policy with certain injuries, we shall also be seeking independent advice and Jan is due to see a neurologist, who specialises in elite athletes, tomorrow. The player has reported no ill-effects today.”

Vertonghen’s unsuccessful attempt to play on after he assured referee Antonio Mateu Lahoz he was well enough to continue, has led to brain injury charity Headway calling for the introduction of “temporary concussion substitutions”.

The charity insists rolling substitutes would allow medical staff to make proper assessments of injured players without pressure of the match situation.

Luke Griggs, spokesperson for Headway, said in a statement: “We believe the time has come for football to introduce temporary concussion substitutions that would allow for longer off-pitch assessments to be conducted.

“Concussion is notoriously difficult to diagnose. The symptoms may be hidden and require the individual to be honest about how they’re feeling, while they can also be delayed in their presentation.

“Assessing a player for three minutes – or even five, as was the case with Jan Vertonghen – does not allow for medical staff to make a reliable diagnosis, particularly when this is conducted on the pitch under the gaze of tens of thousands of fans eager for the game to resume.

“The pressure on club medical staff is enormous and unfair, particularly in such high-stakes games such as a Champions League semi-final.”

Griggs also believes that the assessment and decision on whether a player can continue should be made by an independent doctor.

“In addition, independent doctors with expertise in concussion and head injuries should make the ultimate decision as to whether or not a player is fit to continue,” he added.

“Not every head injury will result in a concussion. But allowing players to continue while showing clear signs of discomfort following a head injury is contrary to the ‘if in doubt, sit it out’ principle at the heart of all effective concussion protocols.”

Tottenham boss Mauricio Pochettino insisted he played no part in the decision to allow his defender to play on.

“I think it’s so important, the rules and the protocol are there and our medical staff follow the protocol.

“I was never involved. The decision was the doctor and the referee asked.”

Tottenham were criticised in November 2013 after goalkeeper Hugo Lloris was allowed to remain on the pitch against Everton after being knocked out in a collision with Romelu Lukaku’s knee and initially being unable to remember where he was.

However, Uefa backed Tottenham, saying: “Based on the reports of Uefa’s officials at the match, the concussion procedure was respected during the game.”

The Football Medicine & Performance Association (FMPA) said it was “a difficult situation for all involved” in a statement issued on Wednesday afternoon.

It concluded: “We applaud the position taken by the manager, Mauricio Pochettino, that any decisions taken in such events are entirely the responsibility of the medical staff.

“This was a difficult situation for all involved. The FMPA feels it is prudent to wait for the full facts of the incident to emerge before commenting further.”