All the latest injury and suspenion updates ahead of the action 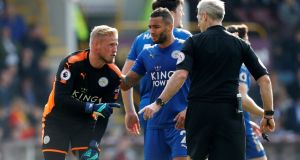 Liverpool (3) v Stoke (19), 12.30pm – Live Sky Sports
Liverpool manager Jürgen Klopp is without Alex Oxlade-Chamberlain after he sustained season-ending knee ligament damage in the Champions League win over Roma. That could lead to an opening for youngster Ben Woodburn to feature alongside Jordan Henderson, James Milner and Georginio Wijnaldum. Forward Sadio Mane is unlikely to be risked after he was pictured visiting a private hospital on Thursday, although Klopp insisted the Senegal international’s problem was not serious.

Stoke are set to be without right back Glen Johnson. He suffered a recurrence of his groin injury during last weekend’s draw with Burnley so Kurt Zouma is likely to deputise. Forward Eric Choupo-Moting (groin) and defender Kostas Stafylidis (fractured rib) remain on the sidelines.

Burnley (7) v Brighton (13)
Ben Mee (shin) and Scott Arfield (calf) will again be missing for the Clarets. Boss Sean Dyche has confirmed on-loan Tottenham winger Georges-Kevin N’Koudou (hamstring) will be back available but Steven Defour and Robbie Brady (both knee) are out.

Brighton boss Chris Hughton has no fresh injury concerns. Midfielder Davy Propper remains unavailable as he serves out a three-match suspension and Steve Sidwell continues his recovery from an ankle problem.

Crystal Palace (14) v Leicester (9)
Palace have no fresh injury concerns. Jeffrey Schlupp and Connor Wickham have returned to training, but both are likely to be on the substitutes’ bench at best. Scott Dann, Jason Puncheon and Bakary Sako remain long-term absentees.

Kasper Schmeichel and Shinji Okazaki have not recovered in time for Leicester’s trip to south London. Both players suffered ankle injuries at Burnley on April 14th and missed the goalless stalemate with Southampton last week. Ben Hamer is likely to retain his place in goal in Schmeichel’s continued absence. Daniel Amartey will make his return from a hamstring injury for the under-23 side on Friday night.

Huddersfield (16) v Everton (8)
Huddersfield will be without forward Tom Ince. The match-winning hero in their last game against Watford has been ruled out by a hamstring strain. Boss David Wagner has no other injury or suspension problems, but Elias Kachunga, Danny Williams (both ankle) and Michael Hefele (knee) remain sidelined.

Everton will make late checks on Morgan Schneiderlin, Leighton Baines and Dominic Calvert-Lewin. Schneiderlin suffered a dead leg in the win over Newcastle, Baines cut his head in the same game and Calvert-Lewin is suffering from a back issue. Gylfi Sigurdsson has only resumed light training from his knee injury and Mason Holgate is on the way back from ankle trouble.

Newcastle (10) v West Brom (20)
Newcastle boss Rafael Benitez will be without midfielders Christian Atsu and Mikel Merino. Atsu missed Monday night’s trip to Everton with a knee problem and Merino has joined him on the sidelines with a similar, but minor, injury. Striker Islam Slimani made his first start for the club at Goodison Park and will hope for a further chance to impress.

On-loan Daniel Sturridge could make his first start since February as West Brom try to delay a seemingly inevitable relegation. Nacer Chadli (hip) is fit, but while James Morrison (Achilles) has returned to training, he is unlikely to feature for the rest of the season, with the Baggies needing to win at St James’ Park to keep their slim survival hopes alive.

Relegation-threatened Southampton will be without captain Steven Davis and winger Sofiane Boufal. Midfielder Davis has suffered a recurrence of an Achilles injury and could miss the rest of the season, while Morocco international Boufal has been exiled from the first team by manager Mark Hughes following a bust-up. Saints centre back Jack Stephens has completed a three-match suspension.

Swansea (17) v Chelsea (5), 5.30pm – Live BT Sport
Swansea could be without defensive duo Federico Fernandez and Kyle Bartley. The pair both face scans on knee injuries and, if ruled out, could force manager Carlos Carvalhal into playing four at the back rather than three central defenders. Dutch winger Luciano Narsingh is another doubt with an ankle problem, but Portugal midfielder Renato Sanches could return to the squad for the first time since the end of January after a hamstring problem.

Chelsea left back Marcos Alonso will complete his three-match ban. The Blues have no fresh injury concerns, but could make changes following the FA Cup semi-final win over Southampton, with Thibaut Courtois expected to return in goal. Danny Drinkwater (groin) was left out at Wembley but could return, but defenders David Luiz (knee) and Ethan Ampadu (ankle) are out.

Manchester City midfielder Fernandinho returns from suspension and full back Benjamin Mendy could also get more game time after making his comeback from a long-term knee injury as a second-half substitute against Swansea last weekend. Centre back John Stones continues to battle an adductor injury while top scorer Sergio Agüero (knee) has been ruled out for the remainder of the season.

Arsene Wenger could make a raft of changes for Arsenal. The Gunners have prioritised the Europa League in recent weeks and, following a 1-1 home draw with Atletico Madrid on Thursday night, Wenger will want his first-team regulars fit and raring to go in Spain. Pierre-Emerick Aubameyang, cup-tied in Europe, is available while Henrikh Mkhitaryan could feature against his former club but may be one of those rested having only just recovered from a knee injury. Mohamed Elneny (ankle) and Santi Cazorla (Achilles) are missing.

Tottenham (4) v Watford (12), Live Sky Sports, 8pm
Tottenham will assess Danny Rose following his return to training after missing the last three games with a calf injury. That leaves Harry Winks as the only absentee as he recovers from an ankle injury while Hugo Lloris will return in goal after sitting out the FA Cup semi-final defeat to Manchester United.

Watford boss Javi Gracia could have Gerard Deulofeu back after a throat infection but has several players struggling to be fit. Nathaniel Chalobah (knee) is back in training but is likely to miss out while Gracia also noted Roberto Pereyra (groin) could feature while Younes Kaboul (foot), Tom Cleverley (hamstring) and Stefano Okaka (unspecified) are out.