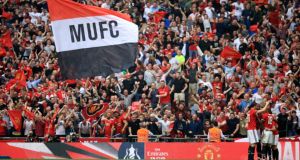 The raising of FA Cup final ticket prices by up to 35 per cent by the English Football Association has been branded “extortionate” by the official Manchester United supporters’ trust.

The increase in ticket costs apart from in the lowest category four band for United’s meeting with Chelsea has been met by dismay by MUST. Category four had the lowest allocation of 10,057 and 10,144 seats for the 2016 and 2017 finals respectively, so the same can be expected for the game at Wembley on May 19th. Those tickets cost £45 (€51).

Duncan Drasdo, MUST’s CEO, told the Guardian: “Freezing the lowest ticket price category is a token gesture which will benefit only a small minority of our supporters. These price increases further illustrate the longstanding issue we have with the FA as both regulator of the game as well as the worst offender when it comes to extortionate ticket prices for fans.

“Ordinary fans should not be punished for the FA’s previous poor financial decisions over Wembley redevelopment. Football ticket pricing is not an ordinary competitive market. It is a monopoly and the FA, as the game’s regulatory body, should be setting an example by rewarding fans’ loyalty. The decision to raise prices to the highest levels ever defies belief.”

Andy Ambler, the governing body’s director of professional game relations, told the FA’s website: “It’s always important to remember that the FA is a not-for-profit organisation where every pound and penny of profit is reinvested back into every level of football in England. If you’re buying a ticket for the final you are directly investing in the future of the game in this country.”

Although the allocations for each category are yet to be released, the numbers for the past two finals indicate category two is almost certain to have the most available tickets, and it is this band that has the highest price increase.

After meeting with supporters’ groups of United and Chelsea plus the other two semi-finalists, Tottenham Hotspur and Southampton, the FA announced that prices for concession seats for the final would be £25 (€28) cheaper than the full-price equivalents in categories one and two – up from £10 (€11) cheaper – and that those in categories three and four would have a £10 saving, in line with last year.

Each club will get more than 28,000 tickets for the final, which will be refereed by Michael Oliver.

The game’s 5.15pm kick-off should allow fans returning to Manchester to catch the final train from London at 10.10pm even if there is extra-time and penalties.