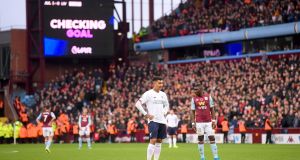 Premier League leaders Liverpool pulled off another extraordinary comeback to win 2-1 at Aston Villa on Saturday with late goals from Andy Robertson and Sadio Mane.

Had they not won, Liverpool would have been seething at a first half decision by the Video Assistant Referee (VAR) system that ruled out a potential 28th minute equaliser by Roberto Firmino. The replay showed it was a very tight decision.

So much so that during the match the Premier League tweeted an explanation as to why Firmino’s goal was disallowed. The tweet read: “Liverpool’s Roberto Firmino was flagged offside before putting the ball in the net against Aston Villa and the decision was confirmed by VAR.

“The red line signifies Firmino and was aligned to his armpit, which was marginally ahead of the last Villa defender.”