Bulgaria to play behind closed doors as racism sanction 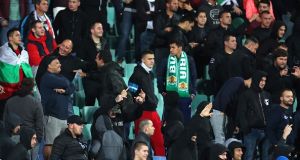 Bulgaria have been ordered to play their next competitive home game behind closed doors with a further match suspended for two years following the racist behaviour of their fans during the Euro 2020 qualifier against England earlier this month.

A section of supporters at the match in Sofia’s Levski Stadium directed racial abuse at England’s black players, while some were also seen making Nazi salutes.

The Bulgarian Football Union was also fined €75,000 for “the racist behaviour of its supporters and the throwing of objects”.

The punishment, announced by Uefa on Tuesday afternoon, exceeds the standard sanction for a second offence at a home match within a period of five years, which would normally be one match behind closed doors.

The sanction means Bulgaria’s qualifier against the Czech Republic on November 17th will be played behind closed doors.

The match against England was stopped in the 28th minute and the first step of Uefa’s anti-racism protocol — a public address announcement calling on the abuse to stop — was enacted.

The abuse continued and Croatian referee Ivan Bebek halted the match again just before half-time, though it was later confirmed that this did not constitute the second step of the protocol under which the referee leads the teams from the field temporarily.

Monkey chanting and booing directed at England’s players and staff could still be heard during the second half, but the match was completed with England winning 6-0.

The president of the BFU, Borislav Mihaylov, resigned the following day, with Uefa president Aleksander Ceferin saying the football family had to “wage war” on racism.

The Bulgarian federation was also fined €10,000 for causing disturbance during a national anthem, while the English Football Association was fined €5,000 for the same offence.

The charge against the English FA related to an insufficient number of travelling stewards will be heard on November 21st after the association requested more time to present its defence.

Piara Powar, the executive director of the Fare network which works to combat racism and discrimination in football across Europe, felt Bulgaria should have been disqualified from the competition.

“We welcome the speed of this decision, but we are disappointed that Bulgaria will not be expelled from the Euro 2020 qualifying competition given their previous record, and obvious inability to deal with the problems they face,” he said.

“We think that the evidence and circumstances of this match would have justified European football being given a stronger signal on the need to tackle racism.

“Obtaining justice for racist acts is not easy in any setting, it is clear that football is no exception.

“We will be in touch with Uefa to explore options - and maintain that Bulgaria and others in the same situation fundamentally reappraise how they deal with racism.”

The English FA released a statement in response to the sanctions being issued which read: “We sincerely hope the disgraceful scenes in Sofia are never repeated.

“Our priority remains our players, support team and fans and we will do all we can to ensure they never have to endure such circumstances again.

“While we acknowledge Uefa’s ruling today, a huge challenge still exists around racism and discrimination in society.

“Football has its part to play, and must do so, but it is for all to recognise the seriousness of the problem.

“While those responsible for such deplorable behaviour at home or abroad need to be held to account, we should not lose sight of the importance of education programmes in finding a long-term solution.

“That has to be the way forward to help address the root cause of such disgusting behaviour. We are ready to build on our work with Uefa, Kick It Out and the Fare network in any positive way we can.”

Anti-racism campaign group Kick It Out said Uefa’s regulations on racism needed to be “overhauled” and said European football’s governing body had “missed an opportunity” to send the right message.

“We are disheartened, but not surprised, to learn of Uefa’s response to the racist abuse directed at England players,” the statement read.

“In our view, they have missed an opportunity to send an uncompromising message on racism and discrimination.

“The current sanctions, however ‘tough’ Uefa think they may be, are clearly not working and leave victims with little faith in their ability to prevent abusive behaviour.

“We feel Uefa’s entire disciplinary process in response to racial discrimination should be overhauled, and urge them to explain the decision-making process behind their sanctions for incidents of discrimination.”

1 Gordon D’Arcy: If South Africa moves up north, it could all go south
2 Charlesland Golf Club set to close permanently in December
3 Dundalk versus KÍ in the Europa League: TV details, kick-off time and more
4 2020-21 Champions League: All you need to know before Thursday’s draw
5 When Down’s 1960 All-Ireland victory brought down barriers
Real news has value SUBSCRIBE
Crossword Get access to over 6,000 interactive crosswords